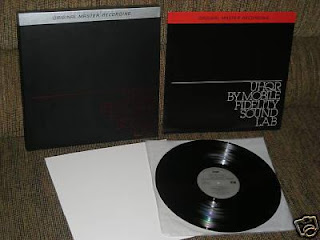 I just received an email from Therese at Peacetown in Youngstown, Ohio. The charity organization is facing foreclosure, and the only choice Therese has is to sell four of her rare and valuable Mobile Fidelity UHQRs to get the money in order to halt the sheriff's sale in two weeks. She doesn't have enough time to go through eBay...Peacetown needs the money NOW.

Three of the four UHQRs are SEALED. That's right...SEALED. Therese has had them over 20 years. They are The Beatles' Sgt. Pepper's Lonely Heart Clubs Band, Supertramp's Crime of the Century and Earl Klugh's Fingerpaintings. The fourth UHQR, Cat Steven's Tea for the Tillerman, has been opened but it is in great shape. It is serial number #1133.

Therese wants to sell all four for $1700. This is roughly half the price she could get right now on eBay, judging from recently sold items. It breaks down like this: $200 for the Cat Stevens, $600 for the Beatles, $500 for the Supertramp and $400 for the Earl Klugh, but she will only sell them as a set. If you or anyone you know is interested, email me immediately at vinylanachronist@live.com.

UPDATE: THESE HAVE BEEN SOLD! Thanks, everyone.
Posted by . at 9:04 AM