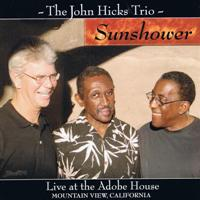 John Hicks' style of playing the piano is unusual. It's almost as if his wrists can rotate 360 degrees so his fingers can fly over the keys like paint rollers. The notes alternate between a beautiful flow and a halting, truncated churn, and this varying cadence sounds natural and almost animalistic in the way it seems so random and graceful at the same time. On his trio's new album, Sunshower, Hicks pays tribute to several of his favorite jazz pianists such as Bill Evans, Sonny Clark, Kenny Barron and Billy Strayhorn in front of an intimate live audience at the Adobe House just south of San Francisco. While he is able to invoke the spirit of these musicians through these tributes, he maintains his own sense of independence throughout. He's truly a unique and gifted musician.

Sunshower is another release on BluePort Jazz, a fantastic label from Jim Merod that uses minimalist recording techniques to achieve a live, natural sound. I've already reviewed a couple of CDs from BluePort in the last few weeks (which you can find here and here), so you can learn more about Jim and his label from those. Here, I want to concentrate on the music, which is just as sublime as it is on the other titles. You get a lot of it, too: these seven tracks last approximately an hour and twenty minutes, with the shortest song, the final "Strayhorn Melody," clocking in at seven and a half minutes. I'm not commenting on quantity over quality here--I'm just underlining the fact that the trio (which includes Roy McCurdy on drums and Bob Magnusson on bass) takes its sweet time developing the themes of these songs, digging deep and with passion.

It's hypnotic, as a collection of beautiful jazz ballads should be. That means--and I hope I don't get in trouble from Jim Merod for saying this--that I was constantly nodding off toward the end of many of these cuts, only to regroup and focus as each song came to its end. If it helps, I do the same thing every time I listen to Kind of Blue or Someday My Prince Will Come. It's simple enough, that this is dreamy, gorgeous music that makes you feel relaxed, and it's so well-recorded that you'll be thoroughly embraced by its warmth. Couple this lyricism with Hicks' churning, undulating and hesitant piano style and you'll feel like you're on a boat, bobbing up and down on the ocean. Nighty night.

The centerpiece of the album, the 18-minute title track, may be the only time you sit up straight and listen intently. Listen to how McCurdy's drums as they become more and more manic, and the cymbals become agitated and jumpy. This track is surprising in the way it builds and maintains suspense, like a good movie. On the next track, a 12-minute long medley of "Say It (Over & Over Again)" and "My Funny Valentine," really shows off the trademark Hicks sound. Playing solo for the first few minutes, Hicks will astound you with the way he can roll those magic fingers across the ivory like no one else you've heard, even as he's trying to evoke memories of other pianists.

Like every other BluePort Jazz CD I've reviewed, this one sounds magnificent. It's quite remarkable that each one of these CDs sounds so different in terms of music, from Gene Bertoncini's quiet and captivating guitar in 2+2=1 to the ambitious and dynamic merging of Billie Holliday and Dinah Washington in the Anthony Smith Quartet's The Lady & the Queen. At the same time, there's a confident calm that underlies all of them, a commitment to the sound of a live performance. I can't wait to hear more. 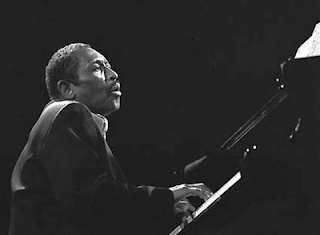