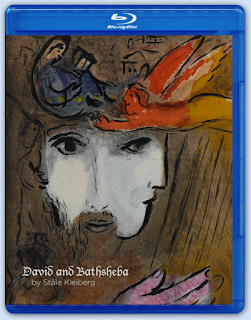 As I work my way through the 2L catalog, I notice that each singular title becomes a benchmark in one audiophile criteria or another, whether it be dynamics, detail or just a complete deconstruction of the sound-making qualities of a specific musical instrument. In the latest disc from this spectacular Norwegian label, the Trondheim Symphony Orchestra and Vocal Ensemble, lead by conductor Tonu Kaljuste, offer an illuminating performance of Stale Klieberg's opera David and Bathsheba, and the listener is treated to a virtual tutorial on how an orchestra can energize a room and define its spaces. Since Morten Lindberg of 2L has already re-written the book on the room interactions within a recording--exhibited by his preference for recording his projects in the warm, natural embrace of Norwegian churches--it's noteworthy that David and Bathsheba is such a stand-out in this regard.

If I assigned one single word to the bulk of the 2L releases, it would be detail. The sheer amount of musical details that come through each of these recordings is nothing short of astonishing, and you will hear spatial clues that are often excluded in lesser discs. Where the 2L catalog shines over the vast majority of labels is the ability of these recordings to include the fine details that inform the listener that this splendid music is being delivered by real live human beings--a quality that has become extremely important to me over the last year or so. When it comes to the hi-rez formats--Blu-ray audio in particular--it's very easy for the flesh and bone elements to be obscured in a smooth haze of perfection. Not so with 2L; I routinely hear the movements of the musicians and they way their bodies connect with their instruments. Anyone lucky enough to experience live music on a regular basis takes these sonic cues for granted. For those confined to reproduction, these cues are often lost--and that's one of the primary qualities that makes it so easy to tell the difference between the two. 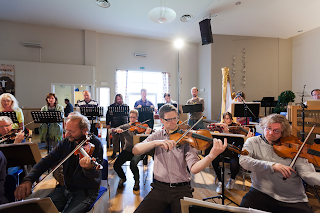 On David and Bathsheba, you'll notice this first in the sibilances uttered by the vocal ensemble. If you're listening to a live choir, you'll immediate hear the "s" sounds of the words and note how they stand apart from the other sounds, almost as if they're somehow isolated in the soundstage. You may hear some audiophiles complain about excessive sibilance, and how it may be a symptom of a problem within a sound system (often due to a misaligned cartridge or a worn stylus). But sibiliance exists in the real world, and it has a rare quality that is hard to capture correctly on a recording. It should stand out; you should pay attention to it. This is the first way in which David and Bathsheba is accurately recorded.

The second quality I noticed is the richness of the bass, specifically of the string bass and cello section. Smooth, warm and forming a perfectly measured foundation for the rest of the sound, this low frequency information interacts with the recording space in nearly magical ways. The transients and the decay achieve more than visceral satisfaction--they are balanced. I've heard classical recordings where the basses are either turbo-charged in the studio or over-mic'ed on the stage. I've also heard live orchestra performances where the sound of a single double bass can get completely lost in the room...you're watching the bow slide across the strings and nothing comes out. With this recording, the basses can be somewhat reticent against the more dynamic sections of the orchestra--when it's called for. When a statement needs to be made, they step out of the shadows and sing in an absolutely natural way, a way that is delivered from additional pressure from the strings and then travels organically through a room--not from a turn of a knob in the mastering suite. 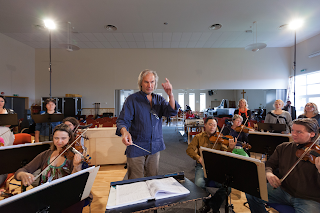 Stepping back from the technical aspects from the performance, I must admit that I'm not the biggest opera fan in the world. While I was studying music in college, I heard one classically-trained violinist say that he hated opera and oratorios and chorals because he considered the human voice to be such an imperfect thing, especially when compared to the sound of musical instruments (such as the violin, I'm sure). While I've consciously fought that viewpoint for most of my life, it did color my perspective to the point where I often find myself listening to vocal works with impatience. David and Bathsheba emerges as an exception; it is so beautifully performed and so musical (the melodies, in particular, are lush and hypnotic and complex), that I can genuinely relax and let the notes flow through me. Coming from someone who believes that they play Stephen Sondheim musicals in hell, that's high praise indeed.

(Once more, this Blu-ray audio disc also comes with a hybrid CD/SACD disc.)
Posted by . at 5:04 PM