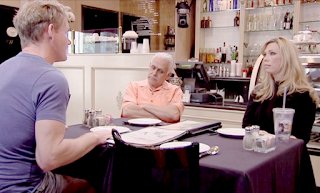 In the coming days and even weeks, you'll be hearing a lot about Amy's Baking Company in Scottsdale, Arizona. Over the last few days they've been the subject of internet scorn and ridicule after the bistro/bakery appeared on Gordon Ramsay's Kitchen Nightmares, and it was the first time that Gordon had to walk away from a restaurant because the owners were so obviously dysfunctional and, quite obviously, nuts.

A quick synopsis: Amy's engaged in an internet battle with Yelp and Reddit reviewers back in 2010, and it didn't go their way because Amy and Samy Bouzaglo, the couple who owns the restaurant, battled each negative comment with foul language, personal attacks and more. They made themselves huge targets, and business went down the drain. They requested help from Ramsay's show to combat the negative image they had unwittingly cultivated for themselves--they wanted Gordon to come in and declare the restaurant great. If you've seen the show (which you can do via YouTube), you know the plan backfired. Among the most vile discoveries: Amy and Samy keep all the tips from their wait staff, they serve frozen store-bought food and try to pass off as freshly made, the food is horrible and horribly overpriced, they love to routinely antagonize and eject customers who complain, and they've fired at least 100 employees over the last year. From watching the show, it's hard to deduce anything other than these are two are odious, insane people who should not be in the restaurant business.

The real battleground is their Facebook page, where they've really lost their marbles. It's great entertainment, the proverbial trainwreck, but it's terribly sobering and sad at the same time. I use the word sobering because I think about my own internet battles over the years, and how I've grown to love a good argument--especially when it comes to the Technics SL-1200. I truly believe that the lowest common denominator in our society can be quickly witnessed while perusing the comments sections of most websites and blogs (one reason why I carefully moderate the comments on this blog and only include intelligent, constructive and generally positive offerings). While I think that the average person who feels the need to express themselves in comments sections are also easy targets in a moderated environment, what you see on the Amy's Facebook page are people who are seasoned, clever and vicious--professional trolls, in other words. There's some great comedy material to be found on that page right now, and in overwhelming amounts. Amy and Samy are buried under this inventive, scathing vitriol.

Personally I think Amy's is a front for some other kind of business--how else can you stay open since 2006 and offer this kind of questionable product or service without earning revenue from some other source? Then again, we might just have a case of a rich man who absolutely adores his nutty wife, and he's humoring her nuttiness by letting her live her dream of owning a restaurant even if it costs him a fortune. It's just a theory--I have no idea what's really going on here, but I am calling shenanigans on the whole affair.

In the end, Amy's Baking Company is done. Every day they stay open and try to fight the internet surge is a day where Samy loses a ton of money. But while it may be easy to feel sorry for the Bouzaglos--they're clearly not having a good week, or even year--there's a point where you have to realize it's all a blessing in disguise. Someone is going to come along and offer these two a reality show. They shouldn't think twice about it. Judging from the massive response to the Ramsay show, there's a huge market for this kind of dysfunction--Honey Boo Boo, I'm looking in your direction. Part of me would be really disappointed if Amy's Baking Company became the most popular show on TV, a la Duck Dynasty. But I'd watch it in a heartbeat.
Posted by . at 8:19 PM