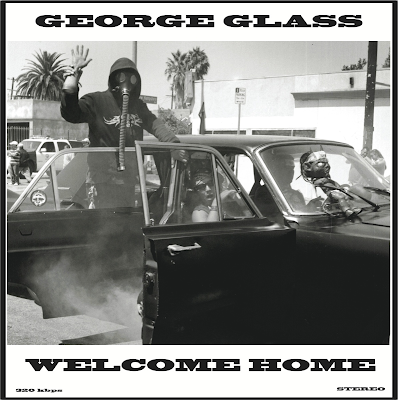 Either you'll get the joke or you won't; depends on your familiarity with The Brady Bunch. It's clearly a 21st century update of Jethro Tull Syndrome. Maybe you're in on the joke and you're expecting an indie-rock cover of "It's a Sunshine Day" somewhere on George Glass's new album, Welcome Home. You'll be stymied there as well. What you will get is an earnest-sounding band that's full of outstanding musicians who can slide across two or three musical genres without missing a beat.

If I could describe this LA trio with a single word, it would be wholesome. That sounds like a death sentence in the edgy world of indie rock, but all the elements are there--a singer with a hobo past (Nicholas Ceglio) whose voice could best be described as amiable and easy-going, a bassist (Peter DiBiasio) who is described in the press kit as a twelve-year-old dynamo who happens to be suffering from Benjamin Button disease, and a drummer (Nathan Kondor) who rides eagles and bears. Their collective output on Welcome Home is smooth around the edges, expertly played and more easy-going than you'd expect. None of this, of course, is a bad thing. Too many bands these days dare you to sift through the squalor and find the talent--these guys wear it on their sleeves.

As I said, George Glass shifts between three basic musical genres. The first genre is straightforward and catchy '80s indie rock, stripped down and simple and full of that aforementioned earnestness. Ceglio's winsome vocals temper the guitars and the tempo, resulting in a pleasant sound that is heartfelt and punchy enough to get you down the road. The band kicks up the originality a notch when they moved into a folksy, acoustic Americana mode that is much more suited to Ceglio's voice--one suspects that this is George Glass's true calling and where they should invest more time in subsequent albums. Songs such as "Metro Hymn," "LAM," "One Liner" and the radio-friendly "AM Radio" fall under this category, and the band seems endlessly more focused and comfortable in this setting.

The third genre, the one that is truly surprising, is revealed in a single song, "Patchwork Girl," that is clearly framed as Welcome Home's magnum opus. This is the song where the band lets loose and explores darker territory--that elusive edge I'm searching for--and the result is a sound that underline's the band's real potential. Epic and loose, this song is the proverbial show-stopper and speaks to the future, the hint of a progressive arc that will really deliver this band to the doorstep of excited, loyal fans. Buy Welcome Home just to experience this massively impressive calling card. 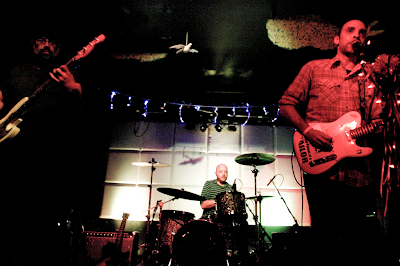 Like most modern indie bands, George Glass is aiming for those memory banks of listeners, the ones that conjure up past years of great music while trying to add something definitive and new. Where the band succeeds is in its staunch refusal to sound like anyone else while mining the past; they feel confident to do their thing and damn expectations. If they can concentrate on those loose, experimental and slightly psychedelic tendencies while staying true to their love of a more acoustic presentation, subsequent albums will continue to impress. I'm keeping a close eye on these three.

And here's some great news...Welcome Home will be available on vinyl!
Posted by . at 11:54 AM