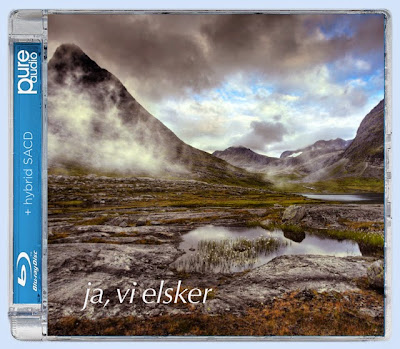 Ja, vi elsker dette landet, if you don't already know, is the name of the Norwegian national anthem. The phrase itself means "Yes, I love this country," which seems slightly odd in the context of most national anthem titles since it seems to be answering a question, or extrapolating on an observation like "I know the winters are long and harsh here, but..." It's an engaging phrase in the most literal sense because it's seemingly part of a conversation, one that ultimately addresses the most adamantine demonstrations of national pride.

That exuberant attitude can be found everywhere in this new release from 2L Recordings, which is performed with almost infinite gusto by the Schola Cantorum choir as well as the Staff Band of the Norwegian Armed Forces, which we've heard before on last year's La Voie Triomphale (which I reviewed here.) The purpose of this recording is to celebrate the 200th anniversary of the Norwegian Constitution, so it's a gift to the Norwegian people, so to speak. (Norway, in particular, is a country that has chosen to tell much of its history through music.) In the passionate liner notes, Erik Fasnes Hansen describes how this music was a part of every Norwegian's childhood, big music played by big bands, and that this "is the true sound of Norway." But as I suggested in my review of La Voie, we're not talking about John Philip Sousa here. We're talking about expressive music that can shift through an amazing variety of moods and images. 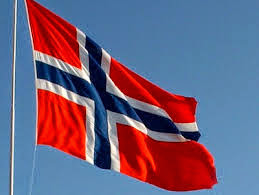 Once again producer Morten Lindberg has chosen a huge Norwegian church with warm, expansive acoustics for this recording. Both the choir and the military band need that space to let this dynamic, complex music blossom, and it does. Recorded in DXD 24-bit/352.8 kHz, Ja, Vi Elsker is a stunning example of how a large musical ensemble can deliver an intimate performance through careful attention to all of the sonic details. This recording should be a convincing argument to everyone who questions the validity of the latest digital technologies and their ability to deliver a sound that's relaxed and natural and pleasing to your brain.

There's something I've neglected to discuss concerning all of these 2L Recordings. Sure, I've done comparisons between the CD/SACD hybrid discs and the Blu-ray audio discs, which are both usually included in 2L releases. But these last few recordings also use some of the latest surround sound technologies as well--this one features 5.1 DTS HD MA 24/192 and 2.0 LPCM 24/192 technologies--and I don't have a surround-sound system to truly explore Morten's efforts. It's not quite the same thing as buying a Blu-ray audio player...I'll need a whole new system. But I have noticed that a few trade show exhibitors have been demonstrating the 2L recordings in their full surround sound glory, and intend to spend some time listening to these formats in the upcoming months.
Posted by . at 1:34 PM