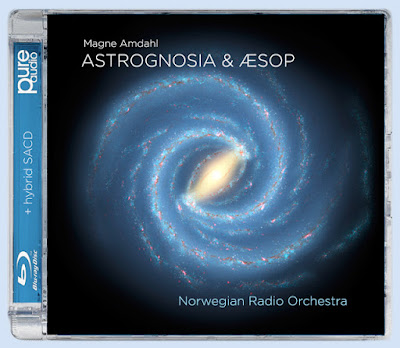 For years I've wanted a audiophile-quality album of movie soundtracks from the '30s and '40s. When I hear those smallish orchestras using drama and sheer romantic sweep to express big ideas, it transports me back to Old Hollywood, when classical composers such as Erick Korngold and Franz Waxman were brought in by the big studios to give some of their releases a more sophisticated pedigree. There's just something about the mood this music achieves with its sultry horns, cinematic crescendos and melodic themes that weave through your mind until they click. With a theme such as Astrognosia $ Aesop, that same motif my be diluted somewhat by ancient mythology, but imagine perhaps a big historical epic starring Claudette Colbert and some lunk who looks good in a toga and a tunic. This is the album I've been waiting for.

Norwegian composer Magne Amdahl doesn't quite come from that era--he was born in 1941 and wrote Astrognosia in 1991 and Aesop's Fables, in 2012--but he does have very strong ties to Norwegian theater and film, and even commercials. In this splendid recording of these two powerful, emotional and somewhat nostalgic orchestral pieces, performed by the Norwegian Radio Orchestra, Amdahl evokes these older cinematic glories through dynamic flourishes that pay homage to a time when the direct approach was best when engaging contemporary audiences. 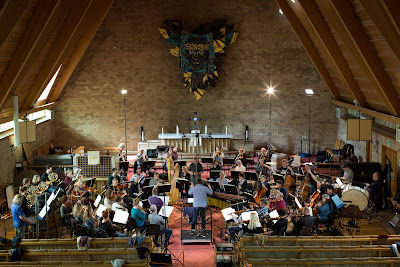 The first piece, Astrognosia, is sort of a Scandinavian variation on Gustav Holst's The Planets with the twelve signs of the Zodiac standing in for the solar system. Amdahl became quite fascinated by astrology over the years, explaining that "the composer in me began to think about what could be made of all this in musical terms." With that rationale, Taurus became "sturdy and loyal," Capricorn became "cautious and selfless," and so on. As Holst's planetary ambitions found their way into modern cinema, Astrognosia reaches for these same goals and achieves them--only time will tell if this exciting suite becomes a symphonic benchmark in the same way.

Aesop's Fables, on the other hand, heads off in quite a different direction--while the same grand themes abound, narrator Dennis Sorhoi's voice is so impish and his vocal rhythms so hypnotic that the performance takes on almost phantasmagorical glow. Suddenly, we are in the realm of fictional worlds, suggested by those classic morals, and the result is playful and hallucinatory.

Morten Lindberg of 2L recorded this goosebump-inducing performance in one of his favorite venues, the Jar Church in Norway, which always adds a rather warm, big sound to every recording whether it's a big orchestra or a solo musician. Here, the amazing acoustics reveal such natural timbres within the orchestra, conducted by Ingar Heini Bergby, and they intersect and dance in a truly generous way. Through his innovative approach to miking and staging within the church, part of a technology he calls Immersive Sound, Morten delivers a signature sound that embraces the listener from all sides as opposed from a fixed point on a stage some distance away. This is one reason why 2L Recordings sound more spacious, more natural and more engaging than most. Highly recommended.
Posted by . at 2:44 PM