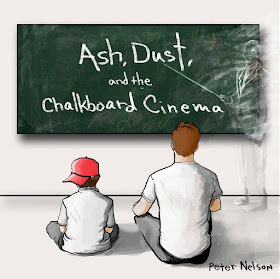 Ash, Dust, and the Chalkboard Cinema is one of those albums that feels like a little fairy dust has been sprinkled along its edges--not because it is fey or whimsical in mood, but because there's something magical in the way it's lit up from within. For five years, trombonist Peter Nelson struggled with a a series of debilitating physical ailments and thought his career as a musician was over. After the usual misdiagnoses, Nelson finally found a doctor who identified focal dystonia, chronic hyperventilation and Chvostek sign--yes, I'll have to look these up as well--and he was successfully treated and able to play once again. This album, his first since getting healthy, is infused with a light of appreciation. It's beautiful and it shimmers with the power of healing in a way you don't often hear in contemporary jazz.

Nelson also possesses a distinct style on his horn that goes against the crowd. It's clearly a trombone, of course, but the way Nelson approaches it is unique, a series a sharp, staccato blasts that are ultimately understated. I'm not trying to pull out the hyperbole here, but that understatement reminds me of Miles Davis and his trumpet, the way he's able to evoke so much feeling in just a few notes. His notes, like Davis' notes, are somewhat plaintive and simple as well, so unlike other trombonists who are standing on stage to make an impact--usually with two or three of their friends. Nelson isn't afraid to stand at the front edge of the stage and dig in deeply to further his cause. 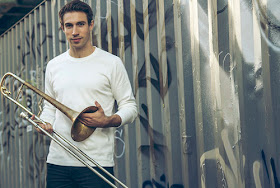 That unusual light he carries in his horn is shared by his ensembles. Yes, that's plural--he switches between a spooky, dreamy trio that includes vibraphonist Nikara Warren and vocalist Alexa Barchini; a quartet that includes bassist Raviv Markovitz, drummer Itay Morchi and pianist Willerm Delisfort; and finally a septet that adds alto sax player Hailey Niswanger, trumpet player Josh Lawrence and bass clarinet player Yuma Uesaka to the quartet. These varied ensembles give the album a unique sound that can expand and contract effortlessly according to the mood. There's something utterly hypnotic about the trio, however, something that probably settles in on my love for the vibes. But the combination of Nelson's thoughtful trombone and Barchini's mystical vocal stylings works incredibly well. After all, how many trombone-vibraphone-vocal trio recordings are there? It's a great idea, and I wouldn't mind an entire album from this type of ensemble.

The heart of this album, of course, is Nelson's ten original compositions. They chart his malady from the beginning ("It Starts Slowly (first in your heart)" and course through a variety of setbacks and, ultimately, triumphs--that lonely nightmare, in the void, slipping through your fingers...release and relax. Even the title is a puzzle to be solved, but it suggests both collapse and rebirth, all accompanied by the arc of a musician's training. This is an exciting and unusual contemporary jazz album, one with many layers of meaning, and definitely one you should discover.
. at 11:17 AM
Share