I'm becoming more convinced than ever that my drummer-as-leader theory is air-tight. A few weeks ago there were a few days where the CDs and LPs were flowing in at an alarming rate, ostensibly because the end of the year is approaching and everyone wants to get stuff done before the holidays. As I've mentioned before, I usually give new releases a cursory listen when they first arrive so I can categorize and schedule them for a deeper listening. Intimate Adversary from Jack Mouse Group snuck into the pile with its monochromatic and basic cover, and it quietly worked itself into the rotation. In other words, it was a wallflower until I played it and listened deeply.

"This sounds like another drummer-led ensemble," I thought, and sure enough it is. There's an energy and focus to these drummer/composer/arrangers that's unmistakable. Intimate Adversary is "post-bop" jazz, played by a superb quintet consisting of tenor sax player Scott Robinson, horn player Art Davis, guitarist John McLean and bassist Bob Bowman. Each member gets a chance to show off his considerable talent, but it's drummer Jack Mouse who supplies the inspiration--everything from the complex and varied drumming style to the humor in the arrangements and even song titles. (The album starts off "Barney's Fife," prompting Mouse to exclaim that "Yep! I'm a huge Andy Griffith Show fan!" 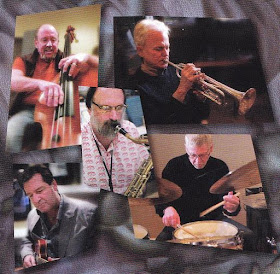 This is a contemporary jazz release that seems perfectly considered and delivered at the right point in time--there's a groove here that suggest these five musicians have explored every nook and cranny of Mouse's original compositions and arrangements. It's a combination of confidence and a willingness to dig deep into every note, that the quintet has been playing these tunes for a very long time but each performance is still vastly different from the last. The title tune, for example, is a moody ballad that seems both deliberate and barely in control of the underlying emotions. Mouse's drumming is slow and exquisite, and you can almost hear him nodding to the others and encouraging them to feel rather than just play.

I've been looking forward to reviewing this CD simply because it's so easy to listen to this kind of jazz, which of course is entirely different than "easy listening jazz." The recording sounds absolutely great, allowing each musician to exist cleanly in his own space. The entire span of Intimate Adversary is so expertly told, and in such a classic way, that you'll feel you're in the most capable of hands and you can finally relax and enjoy the flow.
. at 9:27 AM
Share