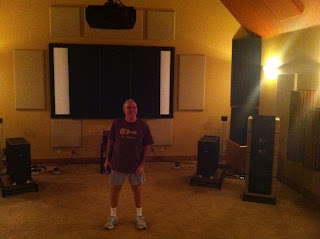 I first met Arnie Sanders at our Whetstone Audio Hootenanny last December. Actually, I had received an email from Arnie several months before and he had invited Colleen and me over to his house in Austin to hear his system. I tentatively accepted his invitation and proceeded to forget about it for months. When I met him at the Hootenanny, I was quietly informed by others in the room that Arnie had perhaps the greatest audio system in all of Austin, and that I should arrange for a visit at once. It was by mere accident that I discovered Arnie's old email--I was looking for an old message from someone else--and was chagrined when I put two and two together.

I kept running into Arnie at the various trade shows such as the Rocky Mountain Audio Fest in October, and by the time he visited our room at CES I felt like he was an old friend. I told him about forgetting about his email. That's when Colleen and I made definite plans to visit Arnie, and now I can totally confirm that Arnie has one of the best privately-owned systems--and listening rooms--I've ever seen. 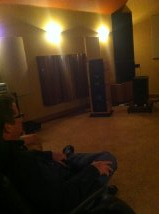 I say "privately-owned" because my frame of reference is the sound room at Avalon Acoustics in Boulder, Colorado, which I visited last October. That room, the size of a small movie theater, was so big that the space behind the speakers was as big as most people's living rooms. What made it so special was that the soundstage seemed to occupy that entire space and had an almost unlimited sense of air, layering and depth. It was built at an enormous expense to Avalon, and it was worth it. Well, Arnie's room is just slightly smaller. This is an audiophile who had a dream to build the perfect room for his system, and he succeeded.

It's almost unsettling to walk into the room for the first time. It's so unexpectedly big that it takes your breath away. Arnie has a beautiful home in a beautiful Austin neighborhood, yet when you walk around downstairs you have no idea of the scope of what's upstairs in that room above the garage. It was only after Colleen and I left that we stopped at the curb, stared back at the house, and noticed the large and seamless extension on the top floor. Our sense of spatial relation was restored. I can't imagine what this cost Arnie, and I know better than to come out and ask.

The room, with its twelve-foot ceilings, featured room treatments that rivaled those at the Avalon room. Arnie has literally thought of everything, from an HVAC system that is almost silent to acoustic panels that drop down over the large video screen. Despite all the engineering employed, the room avoids that ultra-modern look that so many dedicated listening rooms. It's warm, comfortable and welcoming in there. 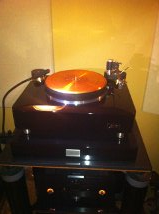 None of this would matter if Arnie didn't have the hardware to back it up. I can't remember every piece in Arnie's system--too much gear to count--but the most salient components were the huge VTL Siegfried monoblock amps, the gorgeous Magico M5 speakers and the rare Steve Dobbins direct-drive turntable which sported a copper platter that weighs 33 lbs. (I'd never heard of Dobbins before, but it's clear from the sound quality that I should.) Digital sources were primarily Esoteric. Arnie's the type of audiophile who is so well-known and respected that manufacturers send him gear just to try out. Of course he's glad to do it.

Yes, Arnie has the hardware, but he also has the software. Colleen and I were treated to stellar recording after stellar recording--it's amazing how we would talk about a specific artist or recording and Arnie would simply walk over to his collection, pull it out and play it for us. Aside from an amazing sense of size and space that Arnie's system delivered, I was struck by the amount of sheer detail I was hearing from even familiar recordings. Simply stated, this is one of the top two or three systems I have heard, and that includes the Avalon room.

I was reluctant to blog about this; I know many top-tier audiophiles who don't want people to know what they have in their homes. Arnie doesn't mind. What sets him apart is his enthusiasm for the hobby and his willingness to expose as many people to it as possible. From talking to other audiophiles in Austin, I've gathered that a visit to Arnie Sanders' house is a rite of passage for music lovers throughout Central Texas. And if you're an unvited guest, Arnie has two giant dogs that will eat you.

Thanks again, Arnie, for a wonderful visit. 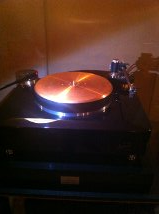