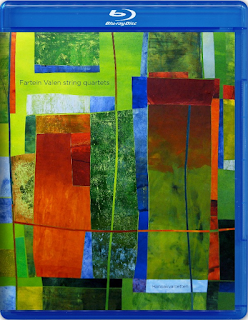 I was very pleased to receive the two latest Blu-ray audio/SACD/CD disc sets, Fartein Valen String Quartets and The Schubert Connection, from Morten Lindberg of 2L Recordings in Norway because they're both recordings of string quartets. My love for intimate classical ensembles harkens back to my formative years as an audiophile living in a small apartment, when I discovered that British mini-monitors and small-scale jazz and classical recordings were the key to enjoying great sound quality without pissing off the neighbors. As a sheer listening exercise, string quartets are also a great and informative tool for evaluating micro-dynamics; it's exciting to follow individual musicians through a particular piece, and decent hi-fi equipment allows you to do that with uncommon ease. (Truly great audio equipment allows you to do the same exercise with large symphonies, but in my early years I had to settle for "better than average.")

The liner notes of Fartein Valen String Quartets open with a fascinating quote from conductor Issay Dobrowen: "If Valen had not been such a shy, self-effacing person, he would have won fame throughout Europe." That's one of the keys to enjoying this recording--by listening to these primarily atonal pieces and putting them into a temporal context (String Quartets Nos. 1 and 2, along with the three brief Goethe poems that close the programme, were composed between 1925 to 1931), one wonders why Valen isn't as celebrated as Bartok, Berg, Schoenborn and Webern, among other modernists. While Valen was well-known in Norway, his output was not widely embraced in his home country due to the conservative musical tastes of the time. That excluded him from the admiration bestowed on Grieg, among other Norwegian composers, at least until the end of his life when performers such as Glenn Gould started to champion his work.

While Valen is famous for his atonal polyphonics, his earlier work built heavily upon the counterpoints of J.S. Bach. That's why it's particularly intriguing that this recording also includes String Quartet Op. 0, which was written back in 1908. This piece, with its sweet melodic themes and lingering allegiance to the Romantic Era, and to my ears only fleetingly to Bach, stands in stark contrast to the rest of this disc; it's positioned toward the middle and acts as a wonderful, lyrical interlude to the signature pieces.

Where this disc excels is in its ability to provide the listener with a true definition of musical dissonance. It's easy to pound clumsily on a piano and call the result atonal. It's quite another to demonstrate how the individual musical lines of each performer--in this case, the Hansa Quartet, and soprano Hilde Haraldsen Sveen, who sings on the final three Goethe poems--can express such beauty and only provide dissonance with the other members of the ensemble. This typically amazing 2L recording illustrates this comparison with more clarity than I've heard before; this is the classical recording for fully realizing each member of a string quartet within the context of the whole ensemble. 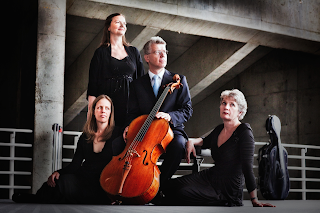 I have to admit that I've stacked the deck for this review. I listened to Fartein Valen String Quartets on an extraordinary audio system built around those incredible Duke Royal Limited speakers from My Audio Designs (disclaimer: I'm the US distributor of MAD). This is the first time I've listened to one of my 2L discs while the Dukes were set up, and it was a rare treat to hear a recording of this caliber reproduced on a world-class transducer. I'll bring this recording, along with plenty of other 2L recordings, to the upcoming AXPONA show in Chicago--so you can hear what I'm hearing.
Posted by . at 3:46 PM