Partnering with SOTA for the 2013 AXPONA Show

For years now I've been paraphrasing a quote from Stereophile founder J. Gordon Holt when I talk about analog in general; something about technologies becoming obsolete just as they become perfected. I even used that quote in my very first Vinyl Anachronist column for Perfect Sound Forever in February 1998. Holt originally used that quote way back in 1985 when he reviewed the SOTA Star Sapphire turntable and the SME V tonearm. Holt felt that the SOTA/SME combo was the new analog king of the mountain upon its introduction, but worried that the new digital format--the CD--would relegate this remarkable achievement into the margins of audio history. Well, both the SOTA and the SME are still being made nearly 30 years later, and they are still among the best. Holt was wrong, but I still like his quote. 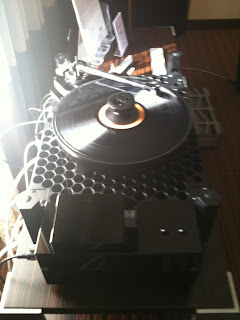 I mention all this because it's 2013, and I'm finally getting to meet the wonderful folks from SOTA turntables. Kirk and Donna Bodinet have been running SOTA since the '90s, and Colleen and I have partnered with them at the AXPONA show here in Chicago. We're using their wonderful flagship turntable, the Millenia, with our PureAudio amplification and My Audio Design speakers. The Millenia, pictured above, is fitted with the SME iV.Vi tonearm (almost as good as J. Gordon's SME V, a tonearm I also owned for many years) and the Soundsmith Hyperion cartridge (the famous one with the cactus needle cantilever that I used with out Unison Research Giro turntable back at CES 2012). We're also using the excellent line of cables from WyWires. 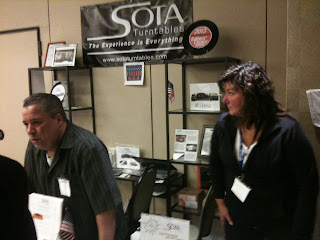 Kirk and Donna are fantastic people, warm and friendly and down-to-earth. They're also humble about their contribution to analog history--while I'm a bit starstruck by them. They were both surprised about the fact that I assisted with the TONEAudio review of the Comet turntable a few years ago. Many of us at the magazine felt that the Comet was the real champ among sub-$1000 turntables. Now I feel kind of bad that I pushed Regas so hard for all of those years when I was truly, truly impressed with the Comet and should have been reminding everyone that SOTA was still around, making great affordable turntables right here in the US. Now that I've spent time chatting with Kirk and Donna, that will change. 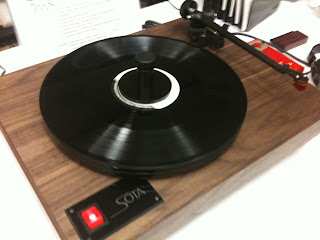 Speaking of the Comet, it's still around. It's a bit more than $1000 but comes with an excellent Rega OEM tonearm called the S301. It also comes with a beautiful wood plinth that really elevates the appearance into something special. The Comets I've always seen were black-on-black...well-built and sturdy, but they could blend into the background visually. Now they're very attractive as well as affordable. 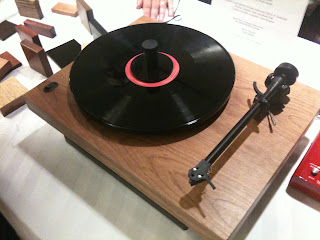 They've also given the entry-level Moonbeam, now in a Series II version, the same wood treatment. In its standard finish, however, the Moonbeam is just $750. Is this the new champion for less than $1000? I'd love to take both the Comet and the Moonbeam home and find out. I'm just happy I got to meet the Bodinets, listen extensively to the wonderful Millenia and be reminded that SOTA Turntables are alive and well.