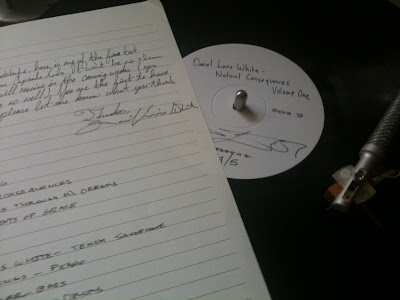 Have I said before how much I love test pressings? They always sound so pristine that they're almost embryonic. I have a decent handful of LP test pressings in my record collection, mostly freebies from being in the industry (Chad Kassem hooked us up with some fun test pressings of Stevie Ray Vaughn, Shelby Lynne and Dusty Spreingfield at the Newport Beach Show in June). I even purchased a rare test pressing of Sonic Youth's Goo from Audiophile International about 15 years ago for $75--it sounds much better than my MFSL pressing. But I've never received a test pressing in advance before, one sent by the artist asking for my feedback.

I've been talking a lot about jazz composer/tenor saxophonist Daniel Louis White over the last year or so. I reviewed his 2011 CD True Communication here in my blog, and I recently interviewed him for my Vinyl Anachronist column in Perfect Sound Forever. In that interview we discussed his upcoming project, a series of vinyl releases titled Natural Consequences. It's an ambitious project using 180g virgin vinyl, half-speed mastering, 7 track recording, all original compositions. 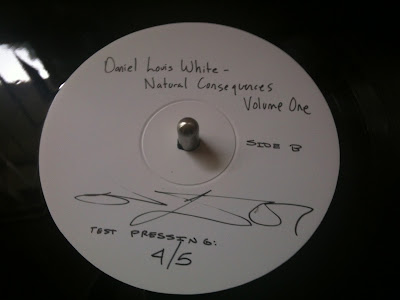 Daniel's been working on this all year. He works his day job, and then cashes the paychecks and heads down to the studio with the money to get a little more done. This level of commitment is rare, and I've been waiting eagerly for the results. Now I have a test pressing of the first volume in my hands, and it's fantastic. It's roughly twenty minutes of music, an EP of sorts, and it will be available at a very affordable price. Subsequent volumes will be released every few months. 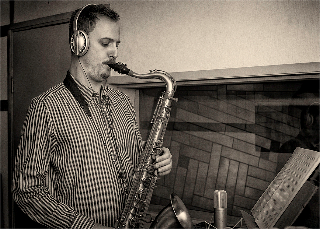 How does it sound? Well, I think I'm going to wait for the release date to get closer before I write up a full review, but I will say that for a traditional jazz quartet (Daniel on tenor sax, Sean Giddings on piano, Daniel Parr on bass and Justin Heaverin on drums) there's a lot of bass energy on this recording. Daniel has really captured the decay, resonance and bloom of real live instruments. Everything is BIG, although still life-sized. This is a bold, ballsy recording--even in its quiet moments.

Daniel promised that the final copies will be cleaner than the test pressing, but I noticed almost no surface noise on this recording--despite the strange grey smudges on the vinyl, something I've never seen before. This looks like a real working test pressing, one that was actually used to evaluate the recording. I'm proud to have it in my possession.
Posted by . at 3:13 PM