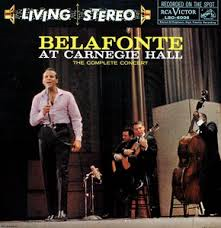 I believe a vast majority of audiophiles are aware of Harry Belafonte's 1959 recording Belafonte at Carnegie Hall. As far as live recordings go, it sits at the head of its class in terms of sound quality. In fact, I can't think of a better recording from this era that captures the sound of a live audience so well and firmly positions you, the listener, among the crowd. Most live recordings position the microphones near the performers on stage so that the audience sounds distant and even canned. I'm not sure what the recording engineers did to make this particular crowd sound so immediate and lifelike, but they should have written a book about it and handed it out to all of their contemporaries.

I've been a huge fan of Belafonte at Carnegie Hall for many years--I chose it at "Best LP Reissue" in my 1999 year-end Vinyl Anachronist column when Classic Records released it in an 45rpm 8-LP set. I never even bought that version--I was po' back then and it cost close to $100--so I had to borrow it from a fellow audiophile. Years later I found an original copy at a thrift store, and as you might imagine it was thrashed and sounded like crap. Just a couple of years ago Colleen surprised me during a road trip by playing a ripped CD of the 45rpm version. "Matilda" has been one of "our" songs ever since. 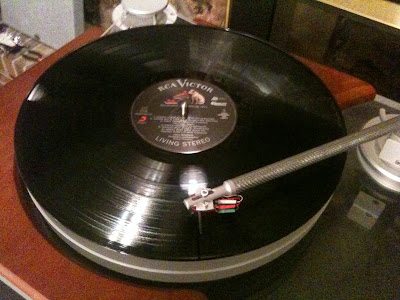 Flash forward to last week, when I was browsing through the Acoustic Sounds website to see what was new. Colleen and I are exhibiting at the Rocky Mountain Audio Fest in a little over a week and I always like to have something exciting and new to play for show attendees. This year we're doing two rooms--one room includes the Unison Research Triode 25 integrated amplifier with built-in DAC and a pair of our new Axis VoiceBox S speakers, and in the other I'm doing an all-analog room with probably the most ambitious system I've ever set up. The pic below shows it in all its glory, right there in the VA listening room--PureAudio amplification, Opera Grand Callas 2014 speakers and my Unison Research Giro turntable with one of my favorite cartridges, the Transfiguration Axia. (I don't think any other cartridge comes close to it at its relatively modest price point.)

Anyway, I noticed that Chad Kassem of Acoustic Sounds had just released another version of Carnegie Hall, this one sourced from the original 3-track master tapes and pressed on 200 gram vinyl. Here's the thing about Chad lately: it seems like he's coming out with HIS version of all the audiophile standards such as Tea for the Tlllerman, Fragile and even the first Ted Nugent LP. (I'll pass on that one.) So while part of me says "Do we really need another version of this record?" the other part of me says "If it's from Chad we do." After buying Sam Cooke's Night Beat from Chad a while ago, I'm starting to think that he can do no wrong. 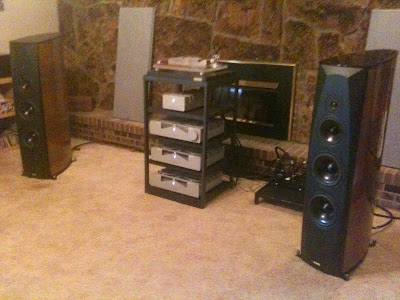 So how is this version compared to the 45rpm version released more than 15 years ago? I wish I still had a copy for comparison. I had a much more modest system back then, so it's not fair to rely upon my memory. But here are some of the distinct advantages to Chad's new version:

1. It's on two LPs instead of eight. (The Classic Records version did have a double LP version, but it didn't sound nearly as good.)
2. It's $50, not $100. In fact, you might not even find a decent copy of the older version for a reasonable amount of money anymore. It's very collectible.
3. The brass section of the orchestra is more edgy and dynamic without peeling your ears back.
4. The crowd noise is even more impressive and natural than before.
5. Everything sounds bigger--the stage, the hall and Harry's voice. At the same time, everything sounds more laid-back and slightly less immersive (not a bad thing, just different as if you're sitting a few more rows away from the stage and the performers.)

This new version of Belafonte at Carnegie Hall, in other words, is a big yes. If you're curious about it and you're not sure if you want to drop $50 on it--especially if you already own one version or another, just drop by my room at RMAF and listen for yourself. I'll probably be playing it constantly.