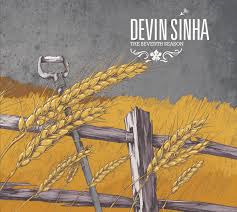 When I first saw the cover for this Devin Sinha CD, The Seventh Season, I started thinking of singer/songwriters such as Sufjan Stevens and Devendra Banhart, folkies who grew up in the middle of the country (in Banhart's case, the country was Venezuela) and later learned how to filter those sensibilities through a more sophisticated life as a musician in a big city. Sinha, who grew up in and around Kansas City, does sound like someone who just stepped out of the tall grasses with a guitar and a notebook. He then settled down in Seattle, and perhaps the heavy, dripping PNW interest in all things Americana starting creeping in around the edges. The two halves of this musical identity fit in seamlessly, so much so that you might not even notice.

When musicians ride that fence between two or three genres as Sinha does, it usually results in a lot of interesting choices. Take the guitar line during the first few minutes of the opener, "Ripcord," and you'll swear that Johnny Marr joined Lampbchop or the Pernice Brothers. The open, rambling tempo of "Whippoorwill Winter" is straight from Alejandro Escovedo's Big Book of Ballads, mixing a spacious and rangy Texan sensibility that might remind you of your last trip to The Continental Club during SXSW. The stand-out for me was the beautiful and melancholy "The Wolves" which reminded me of Neko Case's "Star Witness," one of my absolute favorite songs of all time, more than once.

Sinha's voice is also a wry pleasure, a plaintive yet unusually relaxed style that almost suggests he can sing in a more mainstream manner but won't, a la Lucinda Williams. The band backing him is up for anything, contracting and expanding throughout the tracks, sounding like a collection of Seattle's best session players who were rounded up to make this gifted singer/songwriter sound like an old pro. These songs are mellow and polished, but they're growing-up-in-LA-in-the-'70s-with-all-those-cool-FM stations mellow and polished.

Once again I've been hamstrung by this odd habit I've acquired--listening to CDs for the first time on my car player while driving around--and so I suggest you let this album sink in a bit. My first impression was that it was slick, professional and a little too familiar, but after repeated listening on my reference system the songs added another layer of emotional depth, as well as a dreaminess that allows me to drift along with these songs with incredible ease. The Seventh Season is soothing and gorgeous while still preserving the sort of artistic integrity that will make you tell your friends, "No, there's a lot more here. Trust me."
Posted by . at 3:58 PM