It's been a while since I've received a new release from 2L Recordings in Norway. Then it hit me--when I moved to Syracuse last spring, I'd forgotten to send Morten Lindberg my new address. I sent him a quick message on Facebook about the latest move; I was worried that my old mailbox in Colorado was filled with all the latest and greatest titles. "For the first time in a while I have no 2L Recordings in my review pile. I hope I didn't miss anything!"

Morten replied swiftly: "No worries, Marc! We've been busy making new recordings. Four new titles are ready for release over the next weeks." And sure enough, those four titles reached me safely in New York. I've been listening to all four through the summer, and this one was from TrondheimSolistene the most immediately engaging and familiar--after all, the first 2L Recording I've heard was Souvenir, which I reviewed back in 2012. When I saw their latest, Reflections, I was thrilled that it included one of my absolute favorite pieces for string orchestra--Ralph Vaughan Williams' Fantasia on a Theme by Thomas Tallis. In fact, the first thing I did after unpacking the padded envelope from Norway was to listen to this piece. And it was absolutely beautiful. 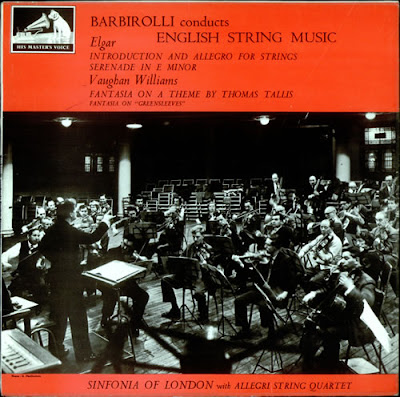 That's saying a lot, considering my longtime reference is an old, somewhat beat up copy of Sir John Barbirolli's English String Music with the Sinfonia of London. This 1963 performance is stunning and of course legendary, but I've been vexed by the surface noise. (I bought it used on eBay, and I paid a significant amount of money for it.) I'd splurge on a better copy, but I'm sure examples are both expensive and rare. So the idea of having a brand new take on this piece, pristine and beautifully recorded, made my day. TrondheimSolistene is known for taking liberties through unique arrangements, but their version is restrained and yet animated, and incredibly fluid and emotional. Is it the equivalent of Barbirolli's? I'm not going to go there--I'm thankful I have both. 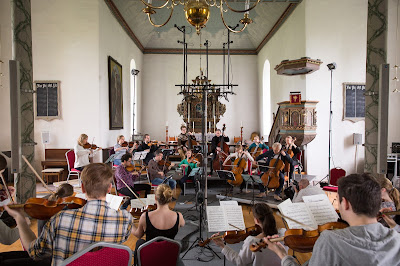 The other two pieces on Reflections have been chosen, along with the Williams piece, for "passion, perfection and raw intensity." These include Benjamin Britten's Variations on a Theme of Frank Bridge and Igor Stravinsky's Apollon Musagete, and they do create a unified and stirring hour-plus of music. Even the Stravinsky piece is perfectly lovely and lyrical--I'm not familiar with it and would never have guessed that it was composed by the same person responsible for The Rite of Spring and Petrushka. At first I thought it might have come from Stravinsky's earlier periods before, as Taruskin wrote, "Stravinsky became Stravinsky." This version was actually revised in 1947, and has flourishes that reach back to the Romantic Era and even, for a few fleeting moments here and there, the Baroque Era.

I did mention that TrondheimSolistene uses atypical arrangements and seating positions--these three pieces are performed with the musicians in a circle and with the microphones on the inside of the circle pointing outward. The placement of the musicians are unique within that circle for each separate piece, so there is a slightly different sonic presentation in each section. Most of the positioning would probably be more obvious in the surround formats--which I do not have yet (I'm working on that as I write). 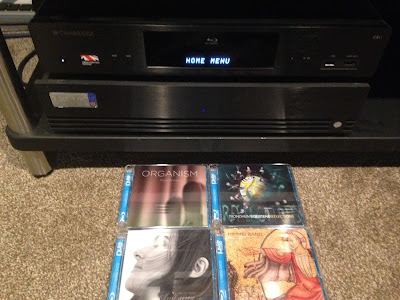 But I finally have access to a decent universal disc player--the Cambridge Audio CXU--so I can finally do more informed A/B comparisons between CD and Blu-ray digital formats. My initial impressions while switching between these formats aren't yet formed--I hear difference but very small ones, and I suspect those margins increase when you switch to multi-channel. (These four new CDs also utilized Dolby Atmos for the first time, so I'll see if I can find away to explore that new technology as well.) For the moment I continue to give the nod to Blu-ray Audio; it's simple quieter and smoother and more extended in the treble. But it's still amazing to me that two-channel redbook CD sound continues to be as realistic and as lifelike as it is. And no one's doing a better job of pushing the CD format into the 21st century than 2L.
Posted by . at 11:34 AM