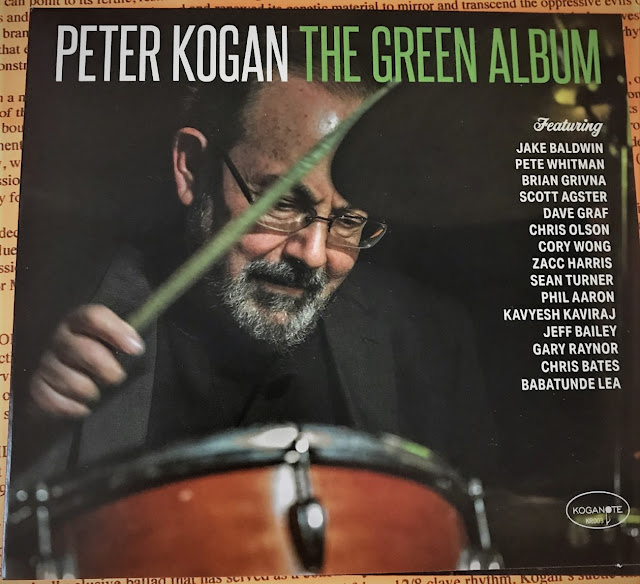 The other day I mentioned that tango's going to be a big thing in 2019--at least in the world of contemporary jazz. Here's another trend that isn't slowing down one bit--the idea of a drummer leading a group, especially when that person also composes and arranges. Maybe I should write a book about this because I feel like I'm getting obsessed, but here's the thing. Am I the only one noticing and talking about this, or am I Captain Obvious and everyone else is rolling their eyes and saying yeah, we all knew that? What else you got? It might just be a matter of doing a little research into the subject, but I am intrigued with this sort-of genre of jazz.

Peter Kogan's new album is out, The Green Album, and it's very different than Weezer's The Green Album. It's far closer to the Charlie Dennard album I reviewed earlier today, strong and steady jazz that maintains an aura of calm. This doesn't challenge my drummer-as-leader thesis--drummers can insert of lot of emotion in those well-placed silences. Kogan as drummer, however, is a subtle enterprise. He's one of those drummers' drummers who avoids the loud and the fast in favor of setting the mood. Focus on him and you'll start to sense that energy he's giving to the others, through tiny details on the blocks and plenty of satisfying ride cymbal action. There's a lot of goodness hiding in that style, and you drummers will know exactly what I'm talking about when you zero in. 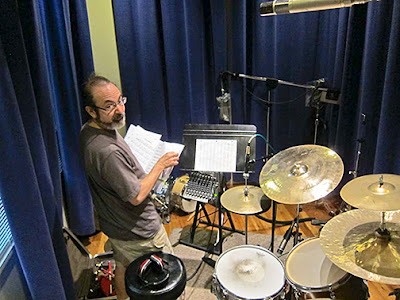 The Green Album's title seems to suggest an answer, believe it or not. The liner notes are a little vague, talking about the idea of green being tropical or fertile, and how global traditions in jazz have emerged in places such as Cuba and Africa and Brazil and New Orleans and deep into the heart of the US. Kogan's from Minnesota, as are many of his fifteen cohorts on this recording, and he tells a story of how jazz is "a towering oak with deep roots," which also suggest the fertile aspect of the color green. The Green Album, as far is I can tell, is ultimately about growth, the will we need to ensure jazz styles survive and endure.

That sounds almost melodramatic, but it isn't. Just recently I was eavesdropping on a couple of jazz musicians, and one of them mentioned that "everyone needs to keep playing the old stuff because we've already lost more than we'll ever know." The Green Album features eleven tracks, a mix of originals and classics such as "My Little Suede Shoes" and "The Mooche." That's when you discover Kogan's skill in the change-ups, and how he's staying authentic to the spirit of each piece of music. It also possesses a fun, casual spirit, more so than the fairly serious Deep Blue from earlier. Most importantly, it's a quiet and confidant example of a thrilling new trend, coming from an energy that only percussionists create.
Posted by . at 3:11 PM