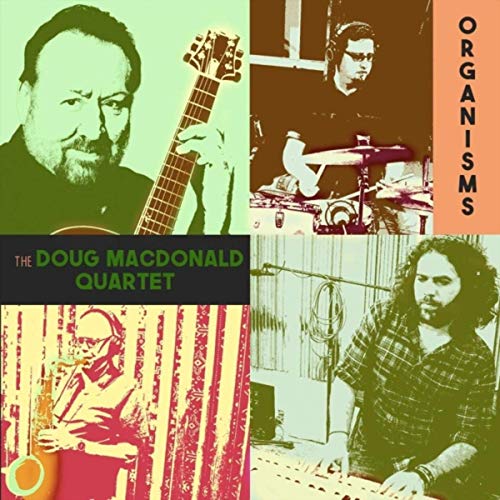 Man, I seems like forever since I've heard some good B-3 Hammond organ-based jazz. The Doug MacDonald Quartet's Organism almost slipped under my radar--it has such an unassuming album cover, and I think it's been in the review pile for months. It's not like I expect all organ jazz to feature a B3 on the cover or to have "ORGAN JAZZ" written in bold letters, but it just seems like I never get tired of this music. Some jazz genres, yeah, I do place them back in the queue because I'm not in the mood. But I'm always in a Hammond mood.

In this case, Doug MacDonald is not the organ player. He's the smooth electric guitarist you hear out front. The B3 is played by Carey Frank, who is one of those Hammond players who add a drone-like layer of texture to the proceedings, although he is given the chance to solo his butt off at least once every song. The rest of the quartet, sax player Bob Sheppard and drummer Ben Scholz, are synched up with the other two in an unassuming and gentle way--something you might not expect from a sax player. Organisms is a low-key album, smoothly integrated into a relaxed whole that feels like an afternoon spent drinking with an old friend. 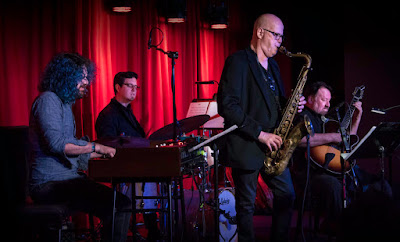 Doug MacDonald's been around for a while--this is his 13th album as leader. This CD has been waiting around so long, in fact, that #14 has already arrived. If I wasn't such a geek about the B3 I'd be focused on the way MacDonald plays his guitar. Like Frank, he floats back and forth between the front edge of the stage and the background, always lending a quiet touch when the others are soloing. He is the leader, but it's not as obvious as you think. Each note outside of a solo is designed to coax the others to explore. That said, he does add a lot of texture to his notes from the tips of his fingers and always lets you know how's he's coming up with these great little riffs.

Organisms isn't a landmark album by any means, or a step in a new direction. There's a sense that these four musicians really like each other, and that the whole is incredibly rewarding because there are no lofty expectations. This is a breezy album that flies by like a pastel ghost, and it will put you in a fabulous mood if you love the Hammond B-3 as much as I do.
Posted by . at 10:29 AM