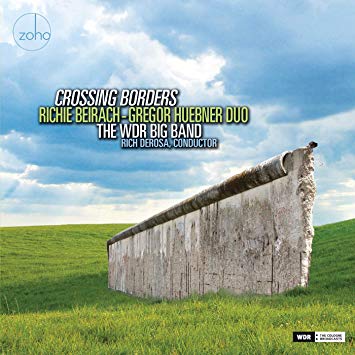 It's strange that I don't necessarily think of Zoho Music when it comes to big band recordings. There's always an intimacy involved, a deeply personal story that's being told from the point of view of a musician/composer who was born in one place and now plays jazz in another. Pianist Richie Beirach and violinist Gregor Huebner have enlisted the help of the WDR Big Band in Germany for Crossing Borders, which sounds like a perfect title for a Zoho release. These two musicians have taken the idea of how politics divides us and they have created both a piano concerto and a violin concerto, plus a handful of smaller works, to straddle the fine line between jazz and classical music.

Both Beirach and Huebner were classically trained, so they have the chops to pull it off. What's remarkable about Crossing Borders, however, is how the original ideas within these compositions float eerily between that gray space between the genres and occasionally toss in something that sounds almost familiar. In Huebner's Violin Concerto No. 3, for example, there's a spot where the violinist (Huebner, of course) starts flirting with Arvo Part's Fratres and does an evocative approximation of Gidon Kremer's take on this ethereal and haunting theme. This is anything but traditional big band jazz, in other words. 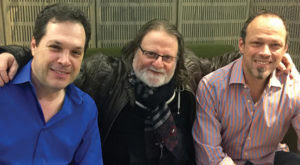 After spending way too much of 2018 submerged in contemporary big band jazz, I started to search for performances in this genre that strayed from the norm. Even in the most ambitious works, there's a desire to punctuate big ideas with a wall of sound, usually led by copious brass. In Crossing Borders, those temptations are resisted with the most astonishing moments occurring within the deep silences and empty spaces between those flourishes. This is one of the main reasons why I like the WDR Big Band--they're always willing to sound different and to do something that hasn't been done before, at least by a big band jazz ensemble.

That means, of course, that this is another ambitious and exceptional release from Zoho Music, one that stands out from most contemporary jazz releases. There's a looseness to these performances, a sense that there are no boundaries and no rules. (The title is a strong indicator of the themes here.) But this isn't messy music in the least--the melodies are tight and the ideas musically pleasing. It's the unexpectedness of the structure of Crossing Borders that's so unusual, and so surprising.
Posted by . at 9:36 AM