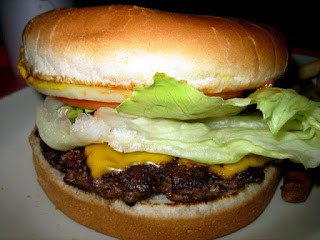 Well, Cassell’s is the Fargo of hamburger joints. It’s the ultimate purists’ burger, one that takes a keen and patient set of taste buds to appreciate and ultimately place in the upper echelon of great hamburgers. A lot of people don’t quite get a simple burger like the one at Cassell’s, especially when the trend in Los Angeles is to go gourmet and make the burger as unique and as exotic as possible. But a lot of people do get Cassell’s and have considered it one of the truly great Los Angeles institutions for over fifty years.

Cassell’s is a no-frills, cafeteria-style burger joint where you have to push your big plastic tray along the metal ledge to get what you want. I won’t reiterate what everyone else has said about the rather bland ambience, because I really don’t care. They put their money where it’s important, into the production of the burger, although I still do balk at paying more than ten bucks for a burger, fries and a drink. Then again, The Apple Pan, Russell’s and most of the other burgers in this league are about the same price, so I don’t really want to single out Cassell’s.

Basically, there are two burgers here, the one-third pound and the two-thirds pound patty. Personally, I’ve gotten to the point where I don’t want to eat a burger that’s more than half a pound. It’s just too much. I do admit, however, that the one-third pound patty in the smaller burger is somewhat dwarfed by the enormous white bun and gets me thinking about Greek burgers. All of those doubts vanish after the first bite. Besides, at Cassell’s they basically just hand you the meat and the bun (and cheese), and the rest is up to you. You can really load up at the condiments bar, which is excellent, including their famous homemade mayonnaise. And their potato salad is exquisite, with an obvious touch of horseradish.

With Cassell’s, it’s all about the beef, even more so than any other burger joint I know. They even sell the uncooked ground beef patties in case you want to try to make your own Cassell’s burger at home. (Fuddrucker’s does, too, but I suspect that this is mostly for show, and that Cassell’s is ultimately more successful at this.) There’s a lot of attention paid to the meat here, which is USDA choice steak ground fresh every morning. Cassell’s is also proud of their cooking method, which consists of a unique double-broiler system that cooks both sides of the patty at the same time.

I know I’ve already mentioned the steak fries, and that they may be the best I’ve ever eaten. The last time I went, though, they substituted square-cut fries, and at first I was a little disappointed. Then I tried them, and they were outstanding, perhaps equaling the square cuts at The Apple Pan. All this confirms what I said about the cooking of the fry mattering more than the fry itself. The cooks at Cassell’s definitely know what they’re doing.

Of course I keep hearing about the good old days, before the ownership change, and how the burgers were much better before the Koreans bought the place (Cassell’s is on the edge of Koreatown). In fact, the current location isn’t even the original location; it moved up a block or two over the years. But this type of thinking drives me crazy because I think when Helen Kim bought the place from Mr. Cassell, she knew what she had on her hands, and she was smart enough not tarnish the reputation of a legend. Plus, could these burgers really have been any better than they are right now? If they were, well…wow. I wish I’d been around back in the day.

I think I may prefer The Apple Pan slightly, but with the purist burgers, it’s not that simple. It’s like the same song being played by different, but equally talented performers. It’s all a matter of preference, and there aren’t really any absolutes. When I think about getting a truly great burger, I don’t automatically think about which one is the best, I think of which one I haven’t been to in the longest amount of time. The Apple Pan, Russell’s, Tyler’s and Cassell’s get worked into a sort of rotation. So while Cassell’s doesn’t quite have my vote for the greatest burger in Los Angeles, it’s so close that I don’t know if it even matters anymore.
Posted by . at 8:22 PM