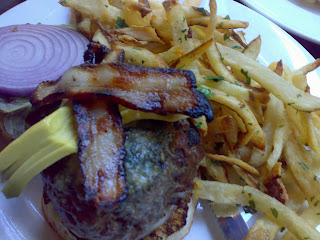 (pic courtesy of The Thirsty Pig blog)
$114. I went over the bill just to make sure, and indeed the total came out to $114. All I wanted was to try the Pug Burger at The Hungry Cat, and by the end of the night I had paid the second highest tab I’d ever had for two people for dinner. I was stunned.


To be fair, we had a few drinks. And the Pug Burger itself was only $14, which is significantly less than some of the Kobe steak burgers I’ve tried over the last couple of years. And the Pug Burger was a huge, unwieldy, extremely messy affair that I couldn’t even finish because it was so big. So it’s not like the burger is a poor value. But just be prepared for the fact that The Hungry Cat is not a burger shack, it is a fine restaurant, and you will pay for the privilege of dining there.

The restaurant doesn’t even focus on burgers. It’s more of a seafood fusion restaurant, with such featured dishes as pan-roasted skate wing and clams in a tomato-chorizo broth. And its bar is one of the hipper places to hang out in Hollywood. It’s the Pug Burger, which can be found way down at the bottom of the menu, that is slowly gaining a reputation as one of the greatest burgers ever created. And now I’ve had two of them, and I’d have to concur.

This definitely invokes the old Sunset Grill Rule. That rule used to state that if the greatest burger ever made in the history of the universe, which was the double chili-cheeseburger at the original Sunset Grill, cost only $2.65, then you’d better have a really good reason for charging ten bucks for yours. The Sunset Grill Rule became obsolete eventually, especially when it closed down for remodeling (and an ownership change) and reopened with the same burger costing almost four bucks. But the same basic concept is still alive. The original Sunset Grill double chili-cheeseburger was so cheap because the Sunset Grill itself was a run-down shack with little overhead. So it’s okay to charge significantly more for a burger, but you’d better have a good reason, like the ambience is really nice, or the waitresses are really cute, or the food is really, really good.

And like I said, the Pug Burger is worth fourteen bucks. It’s at least as tasty as the Kobe steak burger at the Burger Bar, which is close to twenty bucks. It’s a monstrous burger, almost vertical in stature than horizontal, and it is definitely difficult to eat with two hands. Basically, it’s a bacon and avocado burger smothered in bleu cheese, on a very tasty homemade bun that’s reminiscent of the old-fashioned buns at Hamburger Henry’s. Mixed baby greens, ubiquitous among the gourmet burgers, are of course included. And while I cannot tell you what exactly is so special about the beef, I will say that it is seasoned with the finesse you would expect at a fine restaurant. The flavors are complex and interesting.

And as far as The Sunset Grill Rule is concerned, The Hungry Cat definitely passes. I figured out that without the alcohol, the bill would have been closer to sixty dollars, which is more than reasonable for a dining experience this pleasant. The service was attentive and personal, and the restaurant itself, which is streamlined in a post-modernist way, is still a comfortable place, tucked into a quiet little corner in a shopping center right on Sunset and Vine.

It’s still weird, however, to make the transition from The Hungry Cat to somewhere like Sirloin Burger, which is located in a ratty old building in a god-awful part of North Hollywood. Both serve interesting burgers. One is much more expensive than the other. Both are worth it.
Posted by . at 1:53 PM