Cigars, Hurricanes and Whatnot

It figures...I have a couple of days off, and there's a hurricane off the Gulf Coast that's making the weather here in Austin miserable. So the first thing I thought of was getting a few cigars and spending today and tomorrow kicking back on my patio and watching shit get blown everywhere.

First I headed down to Habana House in South Austin...my favorite cigar store/lounge in town. I had to get another Don Pepin Garcia Cuban Classic. The last one I smoked was sooooo good that my brother Mat, a longtime cigarette smoker, said "That smells so good." I let him have a puff, and he had a look on his face that said hmmm...maybe I should start smoking these instead of Pall Malls.

Jim Harrison, the proprietor, even threw in a Don Pepin t-shirt for free because I've been loading up all week. Jim's a heck of a nice guy, and his store is a very cool place to browse, smoke and watch big-screen TV. If you're a cigar smoker in central TX, you owe it to yourself to stop by. Habana House is located inside Rutamaya at 3601 Congress Ave. You can check out Habana House's website at showmeyourash.com. 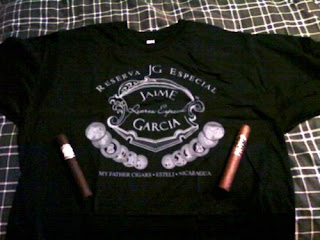 Then I headed down to the heart of Sixth Street to Bobalu Cigar Co. These guys roll their own right on the premises.  I tried them for the first time on my birthday, and I was surprised at how great these cigars are! I've had freshly rolled cigars before, and it can be kind of hit or miss. But the Bobalu cigars are bold, spicy and fun. I had to grab a couple of their new Oscuros. I tried one a couple of weeks ago and it was superb, but alas, it was only a petite corona and was gone way too quickly. They just announced thir 6 X 60 Obscuro, a nice, fat smoke. That's more like it! 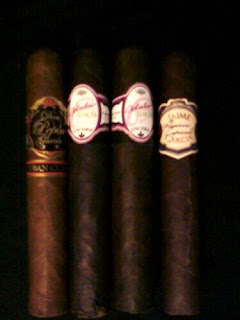