The Projection's While You Were Out on CD 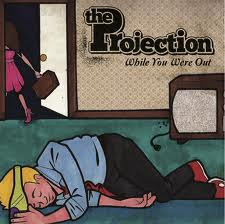 "Punk never died," my younger brother always says, and although he's committed to hardcore he does have a begrudging respect to what he calls Punk Lite, i.e. bands like Green Day, the Offspring and Blink 182. While there are plenty of bands that can still remain true to the original ideals of punk by sticking to the harsh, chaotic and confrontational nature of the genre, I personally feel that you alienate too much of your audience with an unfettered attack via an astounding wall of noise. The Projection, a punk trio from Chicago, gets this. Their new album While You Were Out succeeds at injecting just enough pop into their songs to appeal to a broader, CD-buying public.

The Projection isn't blazing any new trails here, but they have their loyalties in check and provide a sound that's plenty tight and energetic while maintaining the most important facet of punk--speed. They play fast, sing fast and keep it simple. They also know how to mix it up by inserting the occasional synthesizer (such as in the radio-friendly "Trying to Forget) or even some acoustic guitars in the intros (such as "Rock Stars"). They even embrace the very roots of rock by closing the album with an enthusiastic cover of Buddy Holly's "Oh, Boy!" that ties the whole package with a haphazardly tied bow.

Led by vocalist/guitarist Jacques LaMore, bassist Travis White and drummer Collin Benoit, the band even preserves the punk aesthetic by keeping the production quality simple, small and utterly unpretentious. This minimalist approach, which seems to encourage the cranking of the volume knob, is where the band stays the truest to punk sensibilities; they got it right in the studio, in other words. Bands like The Projection won't change the world, but they will keep younger generations interested in punk rock, and make aging punks like my younger brother relatively happy.

Email ThisBlogThis!Share to TwitterShare to FacebookShare to Pinterest
Labels: the projections while you were out, the vinyl anachronist