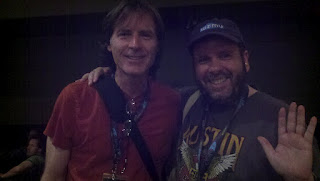 While visiting with Perfect Sound Forever publisher and editor Jason Gross at this year's SXSW, we got to talking about Big Star (as we often do). When Jason and I met for the first time in person at 2010's SXSW--I've been writing for him since 1998--Alex Chilton had passed away only a few days before. I then mentioned at our present meeting that Andy Hummel passed away only a few months after that, and now the only original member left is drummer Jody Stephens.

"I've heard from so many people that Jody Stephens is one of the nicest guys in the industry," I told Jason.

"He personally sent me an email once about an Ardent reissue on vinyl," I said. "I plan on saving that email forever."

A little while later, after Jason and I said goodbye, I received a text from him that said: "Check your email for a surprise." When I got home, I had to search around--Jason had emailed it to my old AOL account by mistake--but here it is. That's Jason and Jody Stephens from earlier that day. I'm sure Jason was barely suppressing a smile the whole time.
Posted by . at 1:49 PM