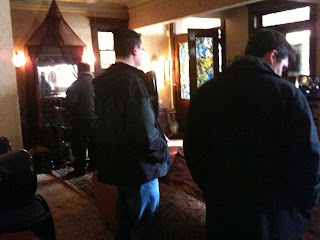 I know it's obvious, but Jersey City, New Jersey is worlds away from Central Texas. There's the whole population density issue, which really comes into play when you look for a place to park. Texas is the land of rock star parking, except when you're at SXSW in the middle of March. Suprisingly, however, people in Jersey City say hello to you as they pass you on the street, just like they do in Texas. The accent's just a little bit different. 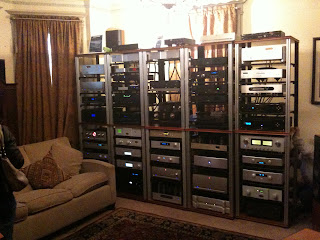 Colleen and I attended our dealer event this past Saturday at the Audio Doctor right in the heart of Jersey City, and it was quite unlike our other dealer events we've held. Dave and Paula Lalin--proprietors of the Audio Doctor and its namesake--works out of their home, but what a home it is. I counted four stories including the basement, and there's a ton of equipment in every nook and cranny. On one level is a state-of-the-art home theater system with rows of seats and a huge projector screen, and other rooms featured entire systems as well as The Rack, a huge fixture that contained a multitude of amplifiers, CD players, DACs and more. 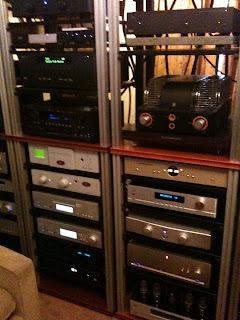 CCI was featuring such Unison Research pieces as the S6 and Unico 50 integrated amplifiers as well as the CDE CD player. We had a few noteworthy guests show up such as Stephen Mejias of Stereophile, Steve Guttenberg of CNET and TONEAudio, Michael Trei of Sound and Vision and Laurence Borden of Dagogo. It was a reunion of sorts for Dave, Steve, Michael and Paula, who all worked at Sound By Singer in Manhattan at one time or another. 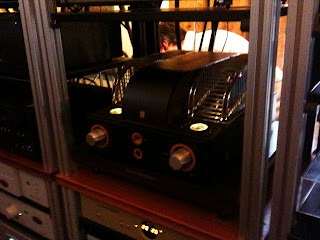 Dave and Paula have created a truly unique audio store in thier home and carry a huge variety of brands at the Audio Doctor. If you'd like to come visit them, give them a call at 877- 4AV CURE or email them at sales@audiodoctor.com. You can also check out their website at www.audiodoctor.com.
Posted by . at 9:05 AM