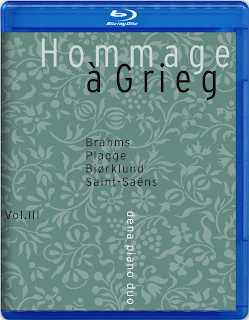 A great recording of a piano duo should do one thing above all others, and that's clearly detailing the interplay between the two instruments and pianists. What makes the new 2L recording Hommage a Grieg so fascinating is that the Dena Piano Duo actually consists of a pianist, Tina Margareta Nilssen, and her former music professor, Heide Gortz of the Berlin University of the Arts. I'm not going to tell you that Morten Lindberg of 2L has captured this recording so accurately that you can hear the teacher leading the student through these pieces, or the student blossoming on her own and the teacher standing back approvingly and proclaiming, "Alas, the student has become the teacher," or some nonsense like that. What knowledge of this special relationship does add, however, is a uniquely human touch. As we listen to two accomplished pianists, a generation apart, we hear two human beings who have clearly spent a lot of time playing together and undoubtedly enjoy it beyond all measure.

Hommage a Grieg is, in true 2L form, a homage with a twist. While the connection in The Schubert Connection I recently reviewed is complex and ultimately becomes a somewhat rhetorical exercise, the links between these pieces from Johannes Brahms, Wolfgang Plagge, Terje Bjorklund and Camille Saint-Saens exhibit a more simple theme--despite the fact that there isn't a Grieg tune on the entire album. Brahms and Saint-Saens were friends of Edvard Grieg, and Grieg in turn used what he learned from his two colleagues as inspirations that can be deduced--by trained ears--from the selected pieces (Variations on a Theme by Joseph Hayden for two pianos, op. 56b and Variations on a Theme by Beethoven for two pianos, op. 35, respectively). These classic pieces bracket two commissioned works by modern Norwegian composers Plagge and Bjorklund that are direct tributes to Grieg. While the later pieces are notably distinct in style compared to the Brahms and the Saint-Saens, the ebb and flow of the entire program is consistently engaging.

Sonically, this recording is no less impressive than anything in the 2L catalog. The aforementioned interplay between the two pianos is thoroughly engaging; these two women are not situated at opposite ends of a stage but pushed rather close together to form an intriguing where-I-end-and-you-begin aesthetic. I recently mentioned a comment I heard from Bob Clarke of Profundo when we discussed audiophiles' fondness for female voices. He prefers a grand piano recording in order to judge a sound system. As I listened to Hommage a Grieg, I kept thinking about Bob's comment and subsequently reduced it to "What's better than a grand piano? Two grand pianos!" If the dynamic range of a single grand piano gets your motor running, double that and you'll know why I find this recording so novel and exciting. 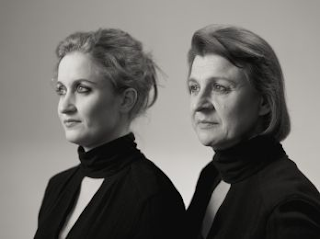 I took a quick survey of my LP collection, which is predominantly classical, and I'm a little embarrassed to admit that I couldn't find another recording of a piano duo. As I said to myself, "That should be remedied immediately," I noticed something written on the cover of Hommage. It said: Vol. III. Indeed, this is the third Dena Piano Duo recording that 2L has released: Vol. I and Vol.II both feature a Mozart and Grieg program. These are obviously worth investigating--for the lovely, rich and dynamic sound of two pianos recorded in yet another glorious Norwegian church, and for the challenging themes that will test your knowledge of classical composition.
Posted by . at 4:41 PM