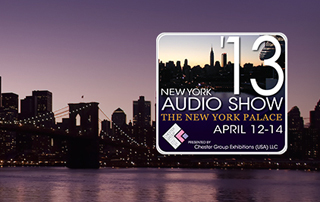 I can't believe it's been nearly two years since Colleen and I went to the AXPONA Show in New York City and announced the start of Colleen Cardas Imports. We're headed back to New York this week, but we'll be attending the New York Audio Show this time. Things have changed a bit since June 2011--we had no dealers back then and just two lines, Unison Research and Opera Loudspeakers. Now we have five lines--we added PureAudio, MAD Loudspeakers and MOOS Audio over the last few months--and around twenty dealers. At AXPONA, we exhibited in one room full of Unison and Opera. This week we will have the equipment in three different rooms. 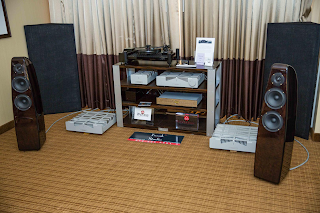 The main room Colleen and I will be running is the My Audio Design room, which will feature a system slightly like the one we demonstrated at the AXPONA Show in Chicago last month. (Above is a photo of that room.) We'll be using the My Audio Design Duke Royal Limited speakers again, as well as the PureAudio Control Preamplifier and PureAudio Reference monoblock power amplifiers. While I'd still love to have that analog rig in the photo--a Sota Millenia, SME iV.Vi and a Soundsmith Hyperion--we will not be doing vinyl this time. We have a surprise guest for a digital playback system, and you'll have to stop by to see what it is. Colleen and I will be manning this system in room 1015 for Timothy Jung of MAD. 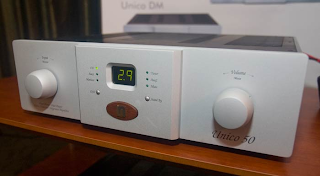 In addition, our good friend Jeff Joseph of Joseph Audio is borrowing the Unison Research Unico 50 integrated amplifier for the room he is sharing--1007--with Channel D/Pure Music. Jeff is well-known for achieving great sound at audio shows, and we're honored that he's using the Unico 50 at this show. 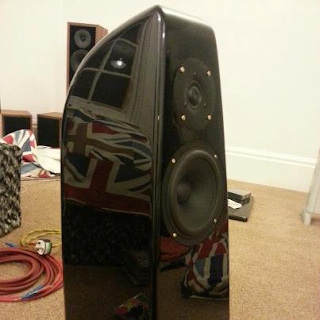 Finally, you'll be able to see the US debut of the My Audio Design Baron loudspeakers in Room 1019, which is the Care Audio room. Care Audio is a brand new dealership in Edison, New Jersey, and they will be a MAD dealer once they open their doors. The New York Audio Show is a christening of sorts for Care Audio, and we are proud to be there at the beginning. The speaker you see in the photo is the actual Baron that will be at the show; the pic was snapped at the MAD factory in the UK just as the speaker was finished. These are a smaller version of the Dukes with one less woofer per side and are more affordable. I'm looking forward to listening to them at the show.

The upcoming New York Audio Show will be held at the New York Palace Hotel at the corner of Madison Avenue and 51st Street from April 12 through the 14th. For more information on the show, check out the Chester Group website at http://www.chestergroup.org/newyorkaudioshow. Hopefully I will see you there!
Posted by . at 10:21 PM