Armed with Legs on CD 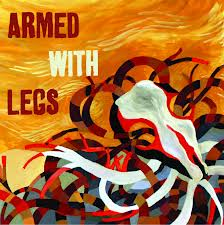 Duos have been the rage in indie music for at least the past decade. While the usual approach for these brave and lonely souls is to embrace a stripped-down, minimalist sound that celebrates rock traditions, it's always refreshing when two people can add enough layers and textures to completely sabotage that aesthetic. Armed with Legs, a pair from Seattle who have been together since 2008, have defied expectations by eschewing the guitar altogether. Those layered guitar sounds you hear are Jim Vermillion's mighty bass guitar, sounding like a traditional bass surrounded by at least three reg'lar electric guitars.

Vermillion accomplishes this trick through a true act of quadrophenia--through each of these nine songs on this eponymous CD, he maintains at least four consistent voices. There's the bass player, steady and true. There's the guitarist who likes to bend and slide and provide a plaintive backdrop. There's another guy who's basically a crunchy, slightly atonal rhythm guitarist, and he's the one supplying the edge. Finally, there's the guitarist who likes to shred with the occasional solo. The only problem is that it's the same guy playing these four guitar parts--with a bass. If you listen to this album without knowing the lineup, as I did the first time, you won't believe what you're hearing.

Oh yes, there's another guy on stage--drummer Nick Krivchenia. Don't think he's sitting in the background, overshadowed by all the bass guitar effects. Armed with Legs has been favorably compared to such bands as Battles, which suggests the crazy, fecund genre known as math rock. Krivchenia's responsible for those comparisons with his unusual time signatures and for his refusal to fade away behind the tom-toms. He delivers a potent blend of speed, precision and delicacy throughout the set, with a drumming tour-de-force on the final song, "The Fruit on the Tree," acting as an exclamation point in regards to his originality. There's a point where the layers of percussion are just as layered and befuddling as the bass, and that's saying a lot. 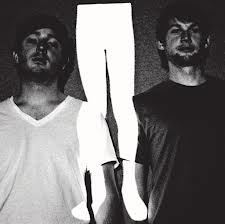 The final ingredient in this recipe is Vermillion's singing, which is extraordinarily gentle in comparison to the furious yet carefully structured instrumental attack. He sounds almost exactly like Markus Acher of German band The Notwist, which means he's defiantly wistful and distant. His calm voice brings all those layers into focus; this album would be woefully different--and probably vastly inferior--if Vermillion sang with the harsh and misfitted swagger so many indie vocalists employ these days. That reserve adds yet another layer to this impressive album, a dreamy and reflective layer that underscores a humanity amid all that precision.
Posted by . at 6:20 PM