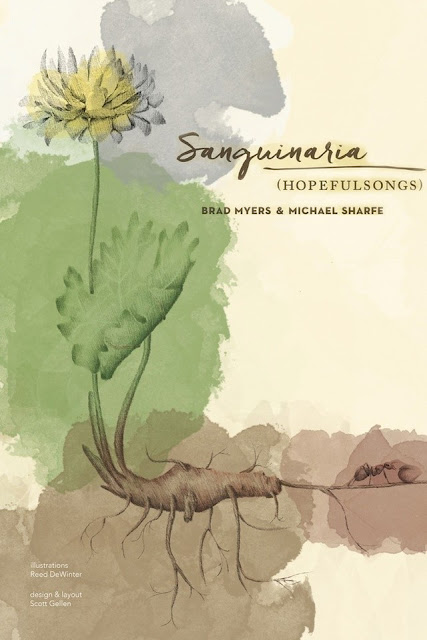 Terms such as soft jazz, or quiet jazz, or anything that implies a soothing, relaxing jazz sound for a Sunday morning spent reading the New York Times--well, that's not always my bag. I want a little bite from my jazz, a little impoliteness. Lite jazz, smooth jazz, adult contemporary jazz, that all makes me shudder. Then I remind myself of the time I introduced a friend to Kind of Blue and he summarized it as slow, depressing and sad. I was astonished at his comments since I've always seen the playfulness. But I still think about what he said and it colors my perceptions every time I listen.

Guitarist Brad Myers and bassist Michael Sharfe remind me of the highly subjective nature of intimate jazz ensembles in their new CD, Sanguinaria (Hopefulsongs), which seems very pleasant and amiable on the surface and feels like the perfect background music for solving crossword puzzles on a balcony somewhere in Tribeca. Even when accompanied by a combination of various drummers, percussionists and keyboard players throughout the album, Myers & Sharfe are busy creating an intimate conversation between themselves. This is an unusually quite interplay, thoughtful and soothing, and it will make you drift. 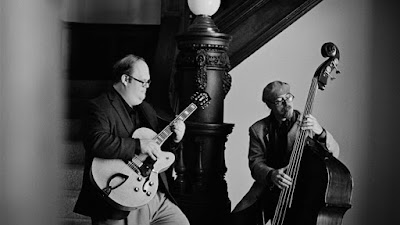 At the same time, this music is neither light nor simple. These two Cincinnati jazz musicians have known each other for a very long time, and the melodies they create together are unusually seamless--it's almost as if one musician found a way to play both instruments at the same time. Additionally, these two are not so comfortable with the partnership, complacent even, that they are unwilling to take chances. Each of these twelve tracks, which combine original compositions with standards from Brubeck ("In Your Own Sweet Way", Guaraldi ("Great Pumpkin Waltz") and Jarrett ("Country"), shows off a wide variety of colors and moods. Only "Norm's Ridge," a homage to Pat Metheny, seems to lack enough sparkle to draw my attention, and that has more to do with my feeling about Metheny's music than anything else. (I find it bleak and plain too much of the time.)

Much of this variety comes from a careful approach to the arrangements for each song. As I mentioned, Myers and Sharfe are supported by two different drummers (Dan Dorff Jr. and Tom Buckley), a percussionist (Marc Wolfley) and a melodica player (Dan Karlsberg). In addition, the two frontmen also play with both acoustic and electric guitars and basses as well as something called "guitar bongos." The bond between this duo is front and center on each track (except when they play solo), but the contexts vary and glow with imagination. 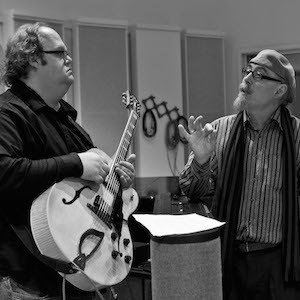 Finally, the sound quality on this recording is an absolute treat. Much of the emotional connection between Myers and Sharfe wouldn't be obvious otherwise. I must concede that it's relatively easy to make an intimate jazz recording like this sound good. Maybe not easy, but common as long as you keep it simple. Sanguinaria, however, was also produced by Myers and Scharfe, which shows that the creative chemistry between these two men permeated every aspect of this release and the reason for its excellence.
Posted by . at 12:45 PM