The Fekete-Kovacs Quintet & The Pannon Philharmonic Orchestra, Conducted by Laszlo Kovacs--Integro/Grandeur on CD 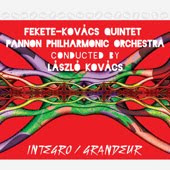 I spent a good part of the '80s exploring 20th Century Music, that nebulous genre of classical music that starts with Schoenberg's Transfigured Night and winds its way through Bartok, Rachmaninoff and Prokofiev until it settles into the minimalist trends of Philip Glass and Steve Reich. Sometimes I wonder where it left off, and when people stopped expecting the arrival of new composers. Someone more educated than me could probably offer a more explicit survey of "21st Century music," if it indeed exists in this context, but more than once I've lamented that movie soundtracks, for better or worse, pretty much make up contemporary classical music. I do realize that this is a distinctly American concern, especially when classical music still thrives in certain parts of the world...such as Hungary, for instance. But is the lack of interest in contemporary classical music contagious?

That's why this 2010 album, a challenging hybrid of jazz and classical genre, is so refreshing and unexpected. It's ambitious as all get out, with a 14-minute beginning section that melds the two disparate musical flows with a sly and extremely dynamic sense of mid-20th century sensibilities--think Leonard Bernstein, perhaps. Through its 66-minute run time Integro/Grandeur is full of unexpected turns, yet these segues are never abrupt or illogical. If that sounds like a stroke of genius, it is.

Dan Muzquiz of Blackbird Audio Gallery sent this CD to me, and I suspect he's either throwing out the gauntlet to see how I'll respond, or he's completely knocked out by the fact that someone is still making music like this and he's hoping someone else will be just as enthusiastic. While I have to admit that it took me a couple of weeks to truly wrap my head around this music, I'll subscribe to the latter position. It's an exceptional and exciting recording, and I now believe that classical music has a clear and promising future.

In a nutshell, Integro/Grandeur is a collaboration between a jazz ensemble named the Fekete-Kovacs Quintet and a full orchestra conducted by Laszlo Kovacs. At first I thought, man, I know this Laszlo Kovacs guy...he's the legendary Hungarian cinematographer who did Easy Rider, Paper Moon, Five Easy Pieces and many others. So he's a composer, too? Nope, same name, different Hungarian. This Laszlo Kovacs has built an extraordinary reputation in the classical world for interpreting such composers as Lizst and Bartok. (For the record, there's a Laszlo Kovacs in Hungarian politics, one in professional soccer, and the main character in the classic French film Breathless uses it as an alias.) 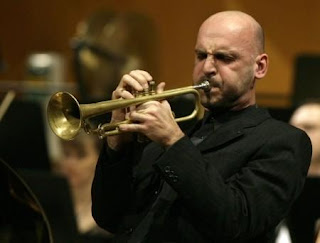 But the man behind this fascinating music is composer Kornel Fekete-Kovacs, a trumpet and flugelhorn player who is known for bringing symphonic jazz back into the mainstream almost single-handedly. Where Mr. Fekete-Kovacs pushes the envelope, and creates something unique than can be called 21st Century Music, is in the way he arranges the classical and jazz components so they share equal billing. Throughout this album, it's simply astonishing to feel the music gently move from one side to the other; there are times when the music is so firmly entrenched in one genre that you think it's impossible to shift--and then it happens swiftly and seamlessly. Sometimes it just takes a few notes of a soprano sax, or a lovely piano interlude...and sometimes it requires the full and unbridled force of the entire Pannon Philharmonic Orchestra.

By the way, the sound quality of this CD, released in the US by the BluePort Jazz label, is superb. It's actually far more than that; this is truly a reference CD. Dan spoke briefly with Jim Merod, one of the most talented recording engineers in the world and founder of BluePort Records, about the recording. (In addition, Jim is also a well-known music critic, audio "guru" and a professor of English and American literature who has taught at Cornell, Brown, Brandeis, UCLA and Stanford. He knows his stuff, in other words.) Jim offered plenty of suggestions for the mastering process and even worked on a few last-minute adjustments that didn't quite make it--mostly because "the Hungarian mail system conspired against them." 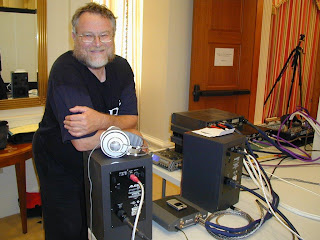 Nevertheless, this is a truly amazing recording that answers my initial question about so-called 21st Century Music. It's not going to be something new we haven't heard before, it's a seamless blending of what we already know; it's the contexts that are novel. I see these same patterns in other musical genres with mixed results, such as pop music that draws heavily on retro themes and motifs, but here it's an unqualified success. Fekete-Kovacs is quite celebrated in his native Hungary, and rightly so. For those of you who complain about the dearth of "new" classical music, it's time to look eastward and see the future.
Posted by . at 6:38 PM