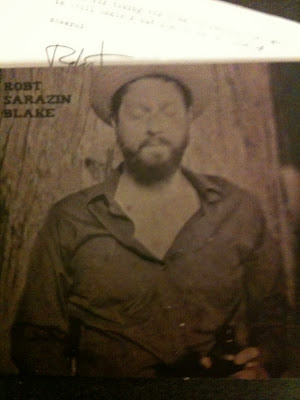 It's a real thrill to be contacted directly by a musician about an upcoming release, as opposed to publicists or record labels. Case in point: a couple of weeks ago I received a Facebook message from folk singer Robert Sarazin Black about his new semi-eponymous album, accompanied by a friend request. Would I send him my address? Hell yes! I reviewed his 2009 album, The Air Your Lungs Forced Out, for TONEAudio at the behest of one of my favorite publicists (which you can read here). Last year, Robert contacted me directly to review his amazing beat-poet manifesto Put It All Down in a Letter, and I later chose it as one of my favorite albums of 2012 for Perfect Sound Forever. Fortunately he remembered my praise and asked if I would check out his newest release. A simple manila envelope was in my mailbox when I returned from RMAF last week.

Here's how real Robert Sarazin Blake is--the CD was accompanied by a note. Not a form letter from the record company or a publicist, but an actual note that was typed out on a manual typewriter--as you can see below. Listening to these three albums, and many others he has recorded over the years, you'll get the sense that he's a throwback just like his typewriter, a man who still travels constantly in search of the next gig. Via email, Robert wasn't content to say thanks for the review--he asked my about my newly adopted Colorado town and asked if there were any decent places to play. I'd love to see him perform on the sparsely-populated Western Slope, and I'm sure he's played in many places with far fewer people. 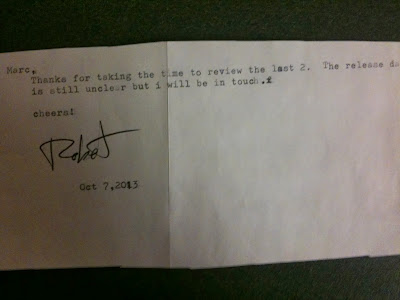 Robt Sarazin Blake, the new album, is a huge surprise. In his last few albums, Blake has stressed his collaboration with his backing band and created an impromptu yet fleshed out sound. Here he's largely alone, just him and his trusty 1978 Martin D-35, with the most spare of accompaniment (most notably Jacob Silver on double bass, Jefferson Hamer and Daniel Zane Maroti on guitars, Robin McMillan on congas, Eamon O'Leary on bouzouki and Anais Mitchell's lovely backing vocals on the touching "Our Winter on New York"). While his singing style remains influenced by the Phil Ochs School of Dry, Plaintive and Political, there's a relaxed loveliness to it that suggests a renewed confidence in his striking vision.

The surprise, of course, is what a beautiful collection of music this is. Blake seems to be traveling backward through time on the last few albums--The Air Your Lungs Forced Out seemed very much a product of the Portland music scene's 2009 infatuation with all things Americana, but Put It All Down in a Letter reached backward toward Ferlinghetti, Kerouac and Ginsberg and was clearly evocative of the day when traveling musicians played to survive and eat their next meal or two. This album, however, resurrects the ghost of Woody Guthrie with its purity and commitment. The nostalgic aspect of Blake's music is gone and he feels as if he's truly singing for the New Depression. 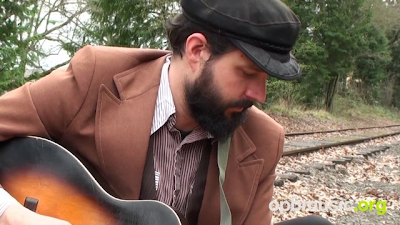 If I had to pick out one stand-out tune, it would be "Sister." Blake laments the fact that his sister went off to fight in the Army, putting a perverse spin on the equal-opportunity joy that was fostered by long-awaited okay of women in combat. There's a sad flip-side to it all, exemplified by a chorus that states "when my sister joined the Army, my mother's heart'd fell/down to the bottom of a dark ancient well." And for those looking for another one of Blake's epic trademark poems there's "Ghosts on Bedford Ave," where he continually wonders if he's chasing the old ghosts of his pasts or if they're chasing him.

It's with amazement that I note it's almost November and I'll have to start thinking about my favorite releases of 2013. Quite frankly, there have been very few. For all of its unheralded beauty and honesty, Robt Sarazin Blake sits at the top of the heap. While there's no current release date, it would be a shame if people had to wait until 2014 to hear Blake at his most serene and inspired.
Posted by . at 7:37 PM