The Chronicles of Sydnia, Part 3: Jeff Knox and the Million Dollar System 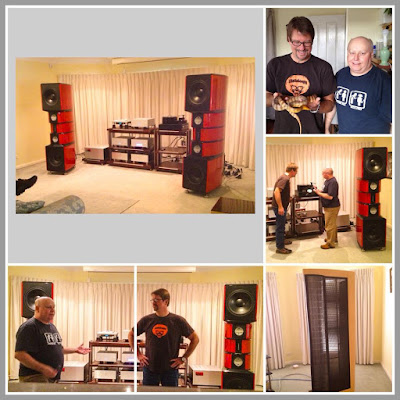 An old audio acquaintance of mine, these days an avowed audio enemy (ah, the Internets!), used to accuse me of being in love with the price tags of high-end audio equipment. That opinion was drawn after he once visited my house in Los Angeles and listened to my audio system. As I showed him each piece of gear, I gave him a quick run down of the specs, features and ultimately the price. By the end of the visit, he pointed out to me that I couldn't stop mentioning how much everything cost--he seemed to be insinuating that I was boasting about the high price of my spread.

There was only one problem with this observation. The system I demonstrated to him wasn't my system, but a system comprised mostly of gear I was reviewing at the time. (This was back in my TONEAudio days.) The only reason I kept mentioning the price of everything was because I wanted him to have a reference of how much each component cost so he would have a better idea of the performance-price ratio--something I had to consider as a reviewer. In addition, my experience in the audio industry and running countless trade shows has taught me that the first question in everyone's minds is "How much?" Besides, how could I boast about the cost of a system I didn't own? He and his bad manners weren't invited back.

This all illustrates how some audiophiles lose their minds when it comes to ultra high-end audio. Browse through some of the audio discussion forums online and you'll find a lot of hate and indignation toward $500,000 speakers, $200,000 turntables, $100,000 amplifiers, $35,000 DACs and $15,000 cartridges. Some people seem to take these prices personally--how dare we market such outlandish gear! A lot of this vitriol is based on envy--some of us in the industry have to tell these exasperated souls that this kind of gear is simply not for them, and no one is twisting their arm to buy it. 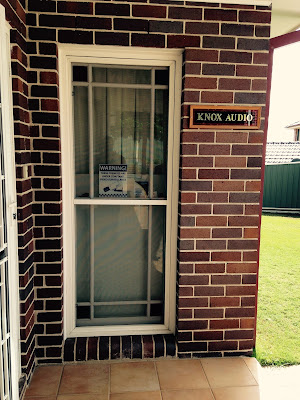 That brings me to Knox Audio, just outside of Sydney. Jeff Knox, the proprietor, has assembled a million dollar system in his main demo room. (Okay, it's a million Australian dollars, but still.) When he started Knox Audio just a few years ago, he decided that he was going to invest heavily in the best system money could buy. He didn't do it to show off, or to target the super-rich. He did it to merely show his clients the possibilities. (He does feature a more modest yet still relatively expensive system in a second demo room.) 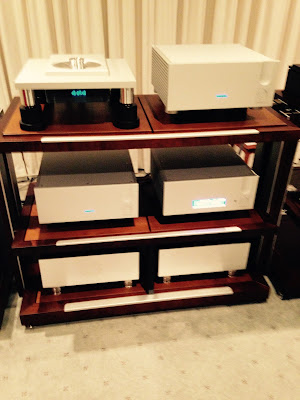 Before I mention the sound, I want to say that Jeff was a extraordinarily gracious host to Brad Serhan, David Allen and me. He spent the better part of the day playing the rarest LPs, great-sounding hi-rez digital--the normal selection of reference recordings designed to make a profound impression. It did. Jeff was so happy to take time out of his busy day just to listen to music with the three of us, which counters the impression many US audiophiles have about dealers who specialize in equipment that pushes the envelope. They expect a snobby salesman who might need to perform a credit check before an appointment is made, someone who is in love with price tags. That's not Jeff.

Jeff even told us that he regularly invites members of the local Sydney audiophile society to Knox Audio for a demonstration, and he's surprised when he gets turned down. Perhaps it's because these audiophiles think Jeff will hard sell them after the audition. What's more likely is that they're afraid to hear his system and then have to go home to their system, which will never satisfy them again. That, of course, is one of the main symptoms of audiophilia nervosa. 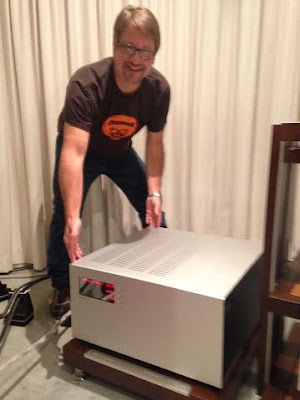 That's nuts, of course. Jeff seems like the kind of person who has a genuine love for high-end audio, and he wants to share those aforementioned possibilities with as many people as he can. It's a hobby, a wonderful one that involves enjoying music, something to get enthusiastic about. When I walked out of Knox Audio that day, I didn't think it was a bummer that I had to go back to more ordinary playback systems. I was energized about high-end audio. I felt honored that I was able to spend so much time listening to that system. I wanted to dedicate myself anew to the industry.

You might ask yourself, "What does a system like this do that others don't?" Well, first of all I'd have to say that it projected all performers and musical instruments as "actual size." There are times when I hear mega-buck systems with huge coffin-size loudspeakers and everything sounds bigger than life. Singers are eight feet tall. Pianos are fifteen feet wide. Drum kits expand infinitely toward the horizon. It's pseudo-impressive, but not realistic. Jeff's system accurately rendered the performances in the proper scale--just as if you were in the audience and the performers were on a stage. There was a stunning lack of artifice in the sound--on many recordings the sound was as lifelike as I've heard from a hi-fi.

Second, the ability of this system to resolve inner detail and capture all of the music from the original performance was without equal. We listened to an LP of a choir backed by an orchestra, and I was able to focus on one particular singer and follow her voice through the entire track. I could then choose another singer and do it again. Take any aspect of a performance, the brush of a cymbal, the tapping of a foot, the movement of an invisible performer across the stage--it was all stunningly whole and tangible. The whole was equal to the sum of the parts.

I've been auditioning hi-fi equipment for what, 35 years now, and I've experienced many amazing dealer demonstrations. None approached this one for sheer thrills. 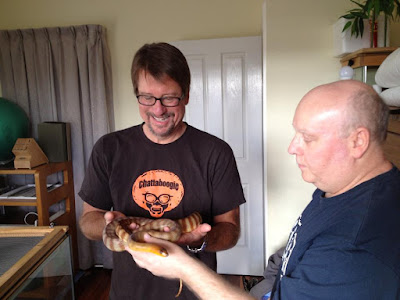 This incredible hi-fi system isn't the only thing that makes Knox Audio stand out from the crowd. Here you see a member of the elite Knox Audio Security Force. As Jeff explained, "The python species Marc is holding is a Woma python ‘Aspidites ramsayi‘ and is found in the Tanami desert in the Northern Territory of Australia. This one was bred in captivity, however they are considered endangered in the wild. This one is an adult male and is about 1.6m long." Jeff is a true reptile lover, and he has a few other snakes kept in terrariums around his house. One, a red-bellied black snake, was venomous, and yeah, I petted it. Jeff just reached in and grabbed it and held it out for me to pet while warning the other two that it was indeed a wild animal and would attack if provoked.

(Due to my extreme arachnophobia, a few of my friends were teasing me about going to Australia--home of the deadly Sydney funnel-web spider. For some reason, everyone thought I was scared of snaked as well. But I like snakes, and here's proof.) 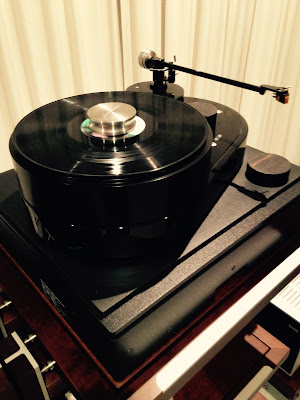 This is the first time I've heard the AMG Viella 12 turntable at length. It's been receiving a lot of positive press over the last couple of years. I've heard it briefly at a couple of trade shows, but not at a prolonged audition such as this. In the context of Jeff's main system, the AMG might seem a little modest--I was expecting a $100,000 super 'table and the AMG sells in the US with arm for around $18,000. That's not chicken feed, of course, but I reminded myself that this was Australia, the land of Continuum. Jeff's reason for including the AMG was simple--he could have used just about any turntable but chose this one because he felt that among his options, it just sounded more musical. (And perhaps Jeff's not in love with price tags either, despite the gravitas of this system--he just wants the best, whatever it is.)

I can concur--while the digital playback source from Ypsilon was nothing short of sensational, I felt the whole system went up yet another notch once we switched to vinyl. The combination of the Viella table and arm with the MySonic cartridge was solidly focused and full of life. 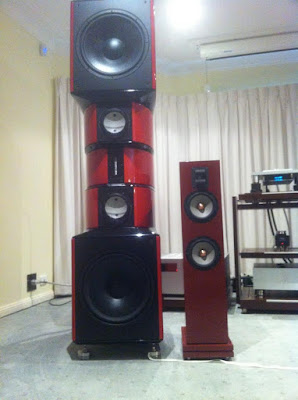 This final pic is a bit of a teaser--Jeff has listened to Brad and David's larger speaker for Brigadiers Audio in the context of this system. I won't tell you what he thinks...yet.

Again, congratulations to Jeff on the finest dealer demo I have experienced. I wish I could just head over there with a few of my favorite LPs and spend another afternoon there, but it's 8,167 miles from where I'm sitting right now. Suffice it to say that high-end audio is very alive and well in Australia, and Knox Audio is definitive proof of that.

If you'd like to know more about Knox Audio, you can check out Jeff's website, call him at 02 9542 2998 or email him at jrknox357357@optusnet.com.au. Don't be afraid of the snakes, or this completely gob-smacking hi-fi system. Just kick back and enjoy the ride.
Posted by . at 6:31 PM