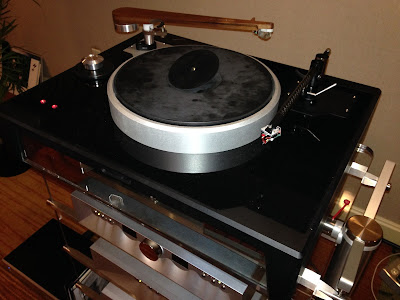 In Part 1, I suggested that I had heard two turntables at the 2015 Rocky Mountain Audio Fest that I felt might represent a new level of analog performance--despite the fact that much of the high-end audio industry is starting to get back to reel-to-reel as the ultimate expression of ultimate sound quality. (Wow, I think I finally figured out my next Vinyl Anachronist column for Perfect Sound Forever, which I have to complete before Christmas!) These two 'tables excel in ways that few other 'tables do, and they provide two completely different ways to isolate the stylus from its surroundings.

My first scheduled visit was to the Thrax Audio room, where they were showing off the amazing new Helix turntable, the Helix, in the Thrax Audio room. While this new turntable is "only" $40,000 in the US, in many ways it's as just as accomplished and sophisticated as 'tables in the six-figure range. 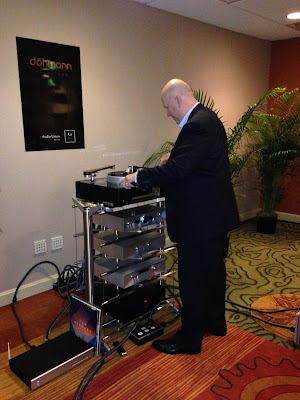 The Helix is a completely different animal. Mounted with both a Schroder arm and a Swedish Technologies arm, the Helix sounded wonderful and musical every step of the way. I liked the unusual styling, which allows you to peer through the front of the plinth and see the incredibly sophisticated innards, sort of like older EMT turntables. The fellow from Helix did something that freaked me out a little--he grabbed both sides of the rack shelf and shook it back and forth. The LP played perfectly the whole time! The designers at Helix have done what should have been done a long time ago--they've invented a turntable that seems impervious to footfalls.

Did I mention that Helix is from Australia? That certainly feeds into my new theme that "Down Under" Audio is pretty fabulous. I was supposed to meet with the Helix designers during my recent trip to Sydney, but I believe the timing was off. So they extended a invitation to visit them in their RMAF room and hear the Helix. I'm glad I did. The entire system was very, very impressive. 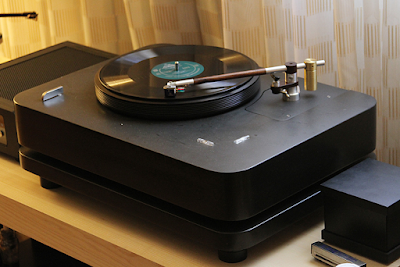 Before I move onto the other turntable, the Saskia, I have to mention audio scribe Mal Kenney. Colleen and I were about to head home across the Rockies and Mal caught us in the hallway. Mal asked us if we had seen anything that impressed us, and I pretty much mentioned what I've reported so far--Endeavor, ModWright, Helix, etc. He told me he wanted me to hear two rooms that he was really impressed with--the Saskia and Exemplar Audio. At this point, I could not take photos since my iPhone was dead and I figured I was done for the day. So I had to steal these last two photographs from Part-time Audiophile. (You can read about the Saskia room here and the Exemplar Audio room here.)

Win Tinnon's Saskia II turntable is, first and foremost, a beast. With a plinth made of solid slate, it weighs 275 pounds. (That makes its $53,000 price tag actually seem reasonable.) Now I'm a person who doesn't necessarily subscribe to the idea that high-mass turntables are automatically better--I point to the wispy Rega RP-10 and its seemingly three-ounce plinth as proof of that--but there was something so solid about the sound of the Saskia coming through the wonderful modded Quad ESL-57s from Dave Slagle. I've never heard imaging more stable and focused in my life. It was a game changer for me, a new reference for analog sound. Solid, stable, fixed in place as with live music. Two months later, I'm still haunted by the exquisite sound in that room. 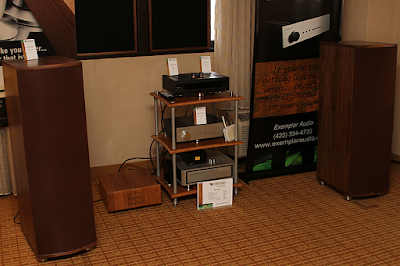 Finally, Mal dragged us into the Exemplar Audio room where we met founder John Tucker. I was instantly intrigued by the system, which was all Exemplar--a hybrid integrated amplifier, an Oppo that was further modded by John, cables and a pair of large single-driver speakers that were finished in a classic look that suggested the Tannoy Prestige line. Fit and finish were fantastic for such a young company. The prices were actually lower than I thought, considering the sound quality of this system.

I was truly impressed with the single-driver speakers. I love this type of high-efficiency speaker, especially when mated to low-powered SETs, but usually you'll hear limited extension at the frequency extremes. Not so with this speaker. the XL III. I heard bass, lots of it, well-controlled and punchy. I heard beautifully sweet and extended highs. I could not find a flaw in the sound anywhere. And with that, my ears finally satisfied, we headed home.

Now it's time to get back to work and prepare for the next show, the 2016 Consumer Electronic Show in Vegas in two weeks. I do have a stack of LPs and CDs to review over the Christmas holiday, which I will try to get through before I have to leave. If you do go to CES, we'll be in room 29-110 at The Venetian. So stop by and say hello!
Posted by . at 12:43 PM