Brian Kastan's Roll the Dice on Life on CD

Sometimes I get some strange stuff in for review. Sometimes I think people are just messing with me, sending me copies of The Emperor's New Clothes just to see if I break the fourth wall for a quick WTF. "We've got a box-set of Tibetan monks farting...let's see if Phillips gives it a good review!" Then again, to stroke my own ego, maybe I'm just one of the few people who can still listen to utter strangeness and cull the artistic merits. Or, people are just messing with me. Yeah, that's it.

From the cover, Brian Kastan's Roll the Dice on Life looks like a fairly straightforward jazz album. Brian, a perfectly normal-looking young man with a shaved head sits cross-legged on the ground holding his guitar in front of a pair of steel doors that feature a couple of stenciled-in dice. The cover also says that bassist Steve Rust, drummer Peter O'Brien and vocalist Miles Griffith are featured. Seems legit. So I popped this into my CD player and WTF? What's going on here? Is this for real?

What I heard, for about ten full seconds before I hit the stop button, was full-force free-jazz-rock-funk, not too distant from what you'd hear on some of Frank Zappa's more experimental releases, but with vocal improvisations that were, to say the least, very interesting. I'm not talking about Ella Fitzgerald scatting in that lovely little-girl voice of hers. I'm not talking about Liz Fraser and her ethereal and nonsensical vocalizations on old Cocteau Twins albums. I'm not talking about the involuntary humming and singing that comes from pure artistic expressions of someone like Glenn Gould or Keith Jarrett. I'm talking vocal improvisations that sound like Dave Chappelle doing his Edgar G. Robinson impersonation. I'm talking about the Cookie Monster eating an entire jar of cookies while wearing a mic. 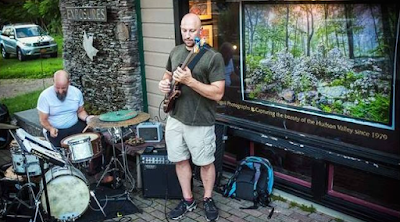 Ah, Miles Griffith. Who are you? The press release talks of his "rich provocative vocals," which are not the words I would use. Griffith turns out to be one of those guys who's been a part of the NYC jazz scene for a couple of decades and has quite the reputation as both a musician and a band leader. Kastan, Rust and O'Brien are also serious musicians with some serious chops. Kastan's also a licensed hypnotist--but I'll bet he doesn't play this album for clients.

But here's the thing. Ten seconds of Roll the Dice on Life can be off-putting and disconcerting. But if you hang in there, crawl into this particular crazy madman vibe, you start to relax and inhabit the space. Your shoulders start to lower. You start realizing that every minute or so, things really start to click between Miles' cartoonish ramblings. Then before you know it the CD is over and wait! Look! There's TWO CDs! Awesome! By the time you make it through to the end you'll have laughed quite a bit because this odd, odd music does have a logic to it that's above and beyond the "raw energy" of outlandish improvisation. Griffith even speaks actual words at certain points, providing an even heavier anchor to the swirling and chaotic mix, especially with the two closing cuts--"Black Lives Matter" and "Black Lives Matter 2" which addresses all the craziness we've had to endure in 2016.

It's a grounded way to end an album like this, one that makes its own rules as you go along. As for me, I liked it. As for you, well, there are two types of people--those who hear ten seconds of Roll the Dice on Life and say "WTF?" and hit the stop button, and those who hear the same ten seconds, say "WTF?" and then sit down and listen to the whole thing. Or maybe, like me, you're a little of both.
Posted by . at 11:38 AM