Dave Soldier's The Eighth Hour of Amduat on CD 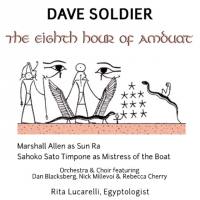 I honestly think I should know more about Dave Soldier than I do. He's a very interesting person, and he's involved in plenty of mystical and cerebral projects that connect the aesthetic dots between music, art and history. (His real name isn't even Dave Soldier.) When I reviewed the latest Sonus Inenarrabilis' CD a few months ago, I was just a bit confused by the way this album was packaged especially in terms of who did what, and whose music they were playing. That's Dave Soldier's fault, I think. Shortly afterward, I found a half dozen of my friends in the audio industry discussing Soldier on Facebook in a way that led me to believe they knew him and he was a good buddy of theirs.

Now I have this new Dave Soldier project on deck, The Eighth Hour of Amduat, and the ambiguity continues. A perfunctory listen reveals very little since it's a somewhat eclectic and disjointed collection of noises and sounds, punctuated by passages of truly beautiful music, all recorded in a careful, loving manner. Looking at the busy cover of the CD undoes some of the mystery--Marshall Allen plays Sun Ra, Sahoko Sato Timpone plays The Mistress of the Boat and there's credit for an orchestra and choir. But then, at the bottom, it says "Rita Lucarelli, Egyptologist." 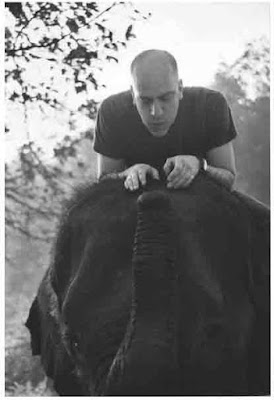 Take my advice and dig around a little bit before throwing this into your CD transport and hitting the play button. In a nutshell, this is what Dave Soldier has done: he's taken the oldest known musical score, "The Eighth Hour of the Book of the Amduat" from 1425 B.C., and he's turned it into an opera that fuses jazz, classical and electronic music. As a whole, this opera jumps around from lush orchestral scores to free jazz freakouts to extended periods of random sound effects and noise and overall it can be a bit frustrating. It's when you focus on the individual components of the opera that you find the hidden jewels. For instance, Marshall Allen's contributions on saxophone and something called an EVI (electronic valve instrument) are intriguing especially when you consider that he's now 93 years old. The choir is fascinatingly unhinged because it's mostly improvisation, a novel concept.

After listening to this album a handful of times, I can be honest and say that reviewing it is quite tough because there are so many layers here and I might not peel them off for a number of years. This is difficult music, but there are so many fascinating touches that I think there's more to discover.

One thing, however--the sound quality is excellent.
Posted by . at 12:24 PM