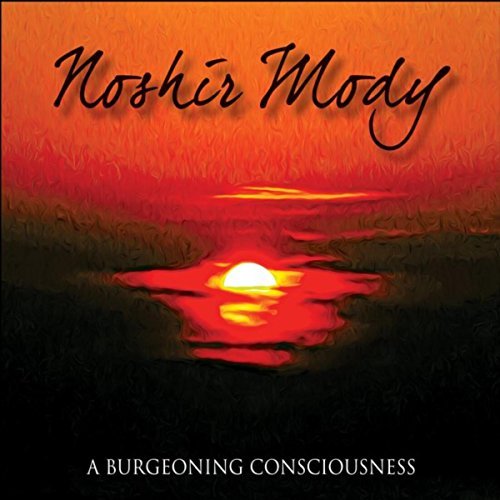 From its first moments, Noshir Mody's new album sounds very different from most contemporary jazz. It's dense and atmospheric, in a very big way, almost as if it was recorded in one of Morten Lindberg's Norwegian churches for 2L. There's a big band sound here, even though guitarist Mody is only joined by sax player Mike Mullan, trumpeter Benjamin Hankle, pianist Campbell Charshee, bassist John Lenis and drummer Yutaka Uchida. The six songs presented here, all original compositions by Mody, are big as well--only one is shorter than eleven minutes. The band specializes in creating sonic landscapes that are lush in the way that they flow from beginning to end, and there is a consistency in tone that makes A Burgeoning Consciousness sound like a stream of consciousness.

Mody's guitar has a lot to do with this. Mody was born in India but has been playing jazz in New York City since 1995. He counts Indian classical music, Bollywood musicals, Al Di Meola and rock in general as inspirations, and it shows in the way his guitar work supports the beat instead of pure improvisation. The liner notes describe his style as impressionistic, and I thought "Bingo!" His tones, while strictly electric, have a lovely pastel tinge to them--pastel that's been roughed up around the edges. This is not your typical round-toned mellow jazz guitar, it's equal parts Carlos Santana, Pat Metheny and Earl Slick. It's a uniquely fun sound. The best way to describe this elusive feel, other than big or atmospheric or impressionistic, is warm. It's a warm embracing sound, and yet one with plenty of fire and excitement. The tempos from the band as a whole are culled from progressive rock genres, and yet each instrument can be broken down into very jazz-like cadences. Your mind will flicker back and forth between the sum and its parts, and then you'll relax and hear the whole sound wash over you complete, especially as each of these epic tunes reach a thrilling climax.

The sound quality is superb--those early comparisons to 2L were not offered lightly. There's a specific sense of the performing stage here and the way each member of the sextet puts out a carefully chosen tone that functions as pure personality. While the energy here is driven by Mody's distinctive guitar, he also encourages each of his cohorts to express themselves as individuals during the solos. The album ends with a mellow elegy titled "Forever July," and it's the perfect coda for a bright, fascinating and energetic release such as this.