I've met bass guitarist Dean Peer on several occasions, and yet I've never seen him play his bass live. "I'm really not that interesting to watch," he told me in San Diego a few months ago. "All of those crazy sounds you hear from my bass? They're all done through microscopic movements of my fingertips, so you don't really see much."

Well, I just watched Dean's AXPONA seminar where he discusses his complex recording techniques, his equipment configurations and even his background as a music teacher. And yes, he plays his bass. And no, he's very interesting to watch.

Dean is the first to admit that he's a shy person (isn't that stereotypical for bass players?), but his relatively quiet demeanor actually adds to the enjoyment of his presentation. In other words, he isn't an arrogant, in-your-face rock star who wants to talk about why he's as great of a musician as he is. Dean's response to questions about his unbelievable prowess with the bass guitar are thoughtful, modest and self-effacing. He's isn't reluctant to give credit to engineers and mixers, and to the complicated recording technology he sometimes employs to achieve those amazing sounds.

And then Dean plays. It's almost unnerving to watch the music explode from such minute movements of his fingers. Dean's performance is effortless but hardly uninteresting. The audience on hand, including me, was mesmerized by his performance. 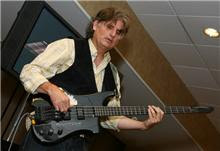 Dean's repeating his seminar later today at AXPONA. If you're here and you're reading this, get on over and treat yourself to Dean's seminar. 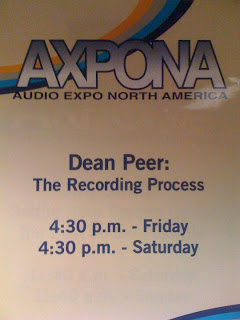