Someone recently emailed me and asked me about Kuzma turntables in general, and the Kuzma Stabi S model in particular. I've always been a big fan of this Slovenian turntable, and I've heard it on several occasions. Despite its bare-bones looks, this is a serious turntable that offers serious performance. I can't find a current price on it, but a 6Moons review from 2006 lists the price of the Stabi S as $1750, and its matching arm as $1000. 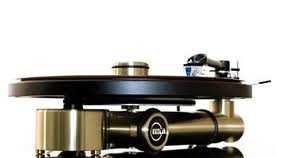 It looks striking for several reasons, but one feature I've always found intriguing is its oversized platter, which is slightly larger than the circumference of an LP. It reminds me of some of the older professional tables that DJs used to use (check out the album cover of Donald Fagen's The Nightfly for an example). 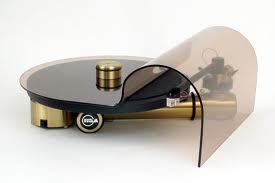 Kuzma has been popping up at recent audio shows I've attended, and I think it's time to give this 'table the love it deserves. If anyone owns this 'table, I'd love to hear from them.
Posted by . at 1:05 PM