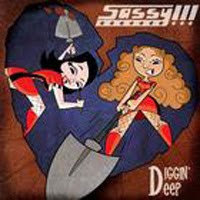 While the cartoonish cover of the new Sassy!!! album, Diggin' Deep, may lead you to believe this music belongs on the soundtrack of the next Powerpuff Girls movie, this music inside kicks way more ass than those caped toddlers. Singers Kitty Largewood and Trixie Delicious (known in previous lives as Bay Area musicians Christa DiBiase and Lynda Mandolyn) do deliver coquettish harmonies about love, betrayal and the blues, but they're backed by a band that's there to rock with crunchy guitars in one hand, and a bottle of Jack in the other.

While the girls' honey-tinged vocals remain a constant throughout Diggin' Deep, the band often shifts gears from hard-driving post punk ("Lullabelle," "She's a Liar"), swamp blues ("You Can Have Him") and even power pop ("Something About You"). The girls only slow down once for the dreamy, Cowboy Junkie-ish "Be Alright" before heading toward the rockin' finale ("Blink Once"). The lyrics are pretty standard for the hard rock genre, full of passionate cliches and oft-quoted laments that are fairly typical for songs with titles such as "Wild Summer," "Devil's Dance" and "Keep it Comin." But a band like Sassy!!!, attitude is everything, and these girls have plenty of that to spare.

Ultimately, Sassy!!! is a pure party band, which means that this album isn't meant to be listened to in a dark room all by your lonesome. Diggin' Deep requires a crowded room that smells of spilt whiskey, cheap cigarettes and just a touch of gasoline. And while it may provide an interesting counterpoint to your favorite hip cable TV cartoon series, this CD will sound much better inserted into the CD player of an old restored hot rod, one that's taken out for a spin on the main drag on a Saturday night--preferably filled with a bunch of lost souls who have seen better days but are still looking for one hell of a party.
Posted by . at 12:13 PM