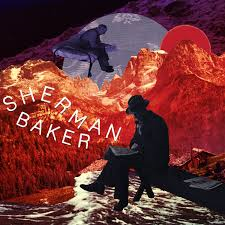 Just this afternoon I was asked to submit my year-end Top 20 list to Jason Gross of Perfect Sound Forever. Once I compiled everything, I was pleasantly surprised to see how highly I ranked this new eponymous CD from singer-songwriter Sherman Baker. My first impression was this: Al Stewart was feeling in a mellow, laid-back mood, so he hired Velvet Underground and recorded some Moody Blues songs. Of course these comparisons didn't hold up over the second and third listening--the Stewart-esque voice still languished between the layers of acoustic guitars, but now I heard more Nick Drake and even a little Elliot Smith. In fact, the guitar in "Ducks in a Row" sounds like it was inspired by "Needle in the Hay." I wouldn't be surprised if Sherman intended it as a homage.

But here's a relatively obscure comparison that's a little more eerie and a little more accurate, even if fleetingly so. Do you remember a band in the early '80s named The Bongos? I have an EP of theirs titled Numbers with Wings and it's friggin' fantastic in an '80s mainstream New Wave way. That crisply produced recording won't necessarily remind you of Baker's reverb-drenched effort which seems to celebrate the late '60s on some songs and then jump strangely into the present on others...except when it comes to the vocals. Richard Barone, the front man for the Bongos, just might be Sherman Baker's long-lost dad...if Al Stewart isn't, that is. Maury Povich, are you listening? 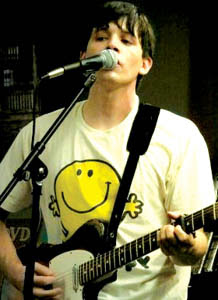 All of these comparisons don't quite get to the heart of why I like Sherman Baker's CD so much. Once again I'm reduced to time machines and RIYLs (recommended if you like) and I've already talked about that in far too many other reviews. So what if modern indie rock is infatuated with the past--it takes me to happy places and at my age that's becoming more and more important. Okay, a lot of new bands in 2013 do that, but what's surprising about Baker is that he seems to take you to different places within the same song, even after repeated listenings. Indeed, he's a bit of a shapeshifter. Did I just hear Happy Jack-era Who there for a second? Or did that song just sound like an outtake from Forever Changes? I think the point isn't that Sherman Baker likes to borrow from sources--excellent and varied sources, by the way--it's that it doesn't make him unoriginal as much as it just puts him in a class of traditional songwriters who value melody, decent and poetic lyrics and a willingness to bounce around amid different genres and succeed at each one.

By the way, the Bongos recently reunited and played a few gigs at their old Hoboken haunts. Richard Barone announced that an unreleased 1986 album titled Phantom Train would be released in October 2013, but I haven't checked to see if he followed through on that yet. After listening to Sherman Baker, I pulled out Numbers with Wings and traveled to some more happy places and wondered how fun it would be to see Sherman open for Richard. Would they nod knowingly at each other? I'd like to be there just to find out.
Posted by . at 9:43 PM