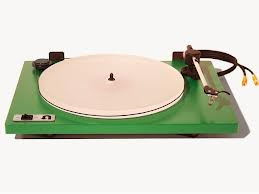 In my year-end wrap up for Perfect Sound Forever, which you can read here, I spoke briefly about the $179 U-Turn Audio Orbit turntable in the "Turntable of the Year" section. No, it didn't win the award--I disqualified it because I hadn't heard one yet and I was worried that U-Turn was having issues getting the initial production run delivered to customers. We first heard about this minimalist turntable about a year ago--U-Turn employed Kickstarter to fund the project--and the buzz in the industry steadily grew throughout the year. Understandably there were a few delays, but now the Orbit seems to be shipping worldwide.

Steve Guttenberg, aka The Audiophiliac, has just reviewed the Orbit in his CNET column, and he's given it a rave review. Well, it's a qualified rave--he still gives the edge to previous entry-level audiophile 'tables such as the Rega RP1 and the Pro-Ject Debut, which cost more than twice as much. But for $179, the Orbit seems to be a winner.