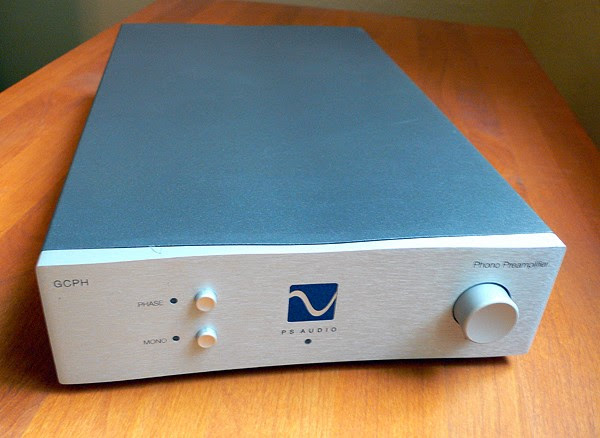 (Ah, at last...some vinyl equipment. In the summer and fall of 2008, I reviewed seven or eight phono preamps in the $1000 range. My favorite of all was the Lehmann Audio Black Cube SE, which I bought and still have in my system. The PS Audio, however, had the most features for $1000 and possessed a sound quality second only to my Lehmann.)

What if the best phono preamplifier in the world cost just $1000? Would the audio world be turned on its ear? Would the manufacturers of all those $5000 to $10,000 phono stages sprint back to their respective drawing boards? Better yet, would such a product prompt millions of music lovers and audiophiles to get back into vinyl for the first time in years?

Probably not. First of all, $1000 isn't chump change for a lot of people, especially when the vast majority of music lovers don't even know what a phono preamplifier is, or what it does. Secondly, there is no best in the world of audio, only preference. Just as Citizen Kane has its detractors, so do products from the likes of Wilson, Continuum and WAVAC.

“No better phono stage ever made...”
These words appear in some of the ad copy for the PS Audio GCPH phono preamp, and I know how this type of hyperbole makes most seasoned audiophiles wince. Still, the GCPH makes a hell of a case for itself by offering an astonishing amount of features for a mere grand. You get plenty of flexibility with impedance loading and gain so that you can use the GCPH with almost any cartridge available. You get a subsonic filter and a large power supply for deep, quiet bass response. You get a choice between RCA and XLR connections. You can adjust gain, phase and switch from mono to stereo via controls on the front panel or by remote control (a major selling point for my lazy butt). You can even use the GCPH as a preamp by connecting it directly to your power amp if you're one of those purists who have an all-analog system. (God bless you if you are!)

All of these features are placed in a handsome and substantial case. In other words, the GCPH isn't one of those no-frills phono stages that eschew features, appearance and even the most minimal of enclosures in the service of a superior circuit or design. Build quality and styling are similar to some of the finest (and most expensive) phono stages I've used. Still, PS Audio didn't get carried away by putting the GCPH in a giant box filled with empty space. At 8.5” by 3” by 15.5”, the GCPH can share a shelf with other similarly-sized analog components, such as an electronic power supply.

Fortunately, the GCPH isn't the polar opposite of those bare-bones phono sections, offering an impressive list of features and only adequate sound quality. In fact, the GCPH is one of those truly aggravating components for reviewers because it's so hard to pinpoint any real sonic shortcomings. With some phono preamps at this price point, I can usually pick up on at least one minor flaw in a relatively short time, such as a lack of deep bass or a slightly dry presentation. The GCPH sounded balanced and confident right out of the box, immediately winning me over. Bass was deep and extended, and the highs were smooth without sounding rolled off.

I've been spending a lot of time listening to the Polyvinyl pressing of Ida's Lovers and Prayers, and I've been hypnotized by the stark yet lovely sound quality of this LP. With the GCPH hooked up both my Michell Orbe SE/SME V/Koetsu Rosewood combo and the Thorens TD-160 HD/Dynavector 17D3 I have in for review, the soundstage was clear enough and large enough to let me see the boundaries of the recording space, something that usually doesn't happen with an affordable phono preamplifier. With other recordings, I felt that the GCPH offered an impressively neutral sound that avoided both the glossiness and woolliness that I find common in most entry-level units.

It was only after I spent some time with two state-of-the-art phono preamps (which cost five to ten times as much as the GCPH) that I finally noticed that this wasn't quite the best phono preamplifier in the world. I hate to use this term, but the PS Audio lacked a certain magic that these very expensive units produced with ease. About half of the audiophiles in the world will roll their eyes, and the other half will know exactly what I mean by this term. Sometimes there's that last bit of illumination in sound that distracts your attention away from the recording, and redirects your focus to the natural properties of the music. It's that proverbial last veil, the point where you say to yourself, “This sounds so real.” The big guys hit that mark on a fairly regular basis, where the GCPH just barely glanced off of that lofty target.

I only had one other minor quibble with the GCPH, and it had to do with the grouping of the RCA jacks on the back panel. The two pairs of jacks are not separated by INPUT and OUTPUT, like on most phono preamps, but by left and right channels. This wouldn't normally be a problem, except for the input jacks are both labeled white, and both outputs are labeled red, which means you'll be plugging white RCA plugs from your interconnects into red jacks, and vice versa. The owner's manual didn't make this as clear as it could have, in my opinion, and you might get a little exasperated working it all out in your brain before flipping on the power switches.

How about “no better $1000 phono stage ever made”?
So the GCPH isn't quite the best phono preamplifier in the world. I'm not even prepared to call it the best $1000 phono preamp, since you might be able to find a quieter battery-powered unit in this price range, or a lusher and more romantic sound from some of the tubed competition. Again, it depends on your preferences, and what type of analog rig you'll be using. But I'll go out on a limb and say that you probably won't find a $1000 phono stage that clearly beats this combination of sound quality, build quality and features. At this level, the PS Audio would be my clear choice, and it certainly earns my highest recommendation.
Posted by . at 10:32 AM