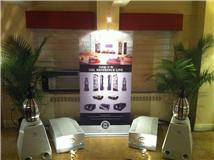 Although I've heard mbl demonstrations at audio shows going back at least a decade--their multi-channel presentation back at the 2002 CES was the first time I heard more than two channels sound realistic--this time was able to really sit down in the sweet spot and hear what this amazing German system could do. 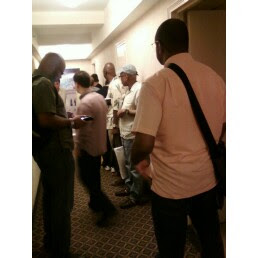 You see, mbl rooms are usually packed at trade shows, and it's difficult to get a good seat. As you can see in the picture above, there was a line going down the hallway to get into the mbl room at AXPONA NYC; it was the only exhibitor that needed to hire crowd control. 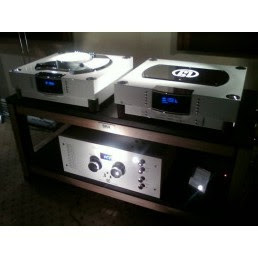 Fortunately, Jeremy Bryan of mbl North America made room for me on Saturday and played a few choice cuts. First of all, this is the first time I've ever seen the mbl gear in white, and I have to admit that it was a stunning choice. One of the subjects discussed at the show was the emergence of white as a new popular color for hi-fi ("White is the new black," in other words), and if it's done right it's something that absolutely exudes opulence and prestige. mbl definitely did it right. 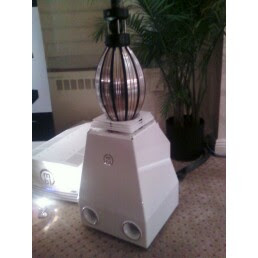 As for the music, Jeremy stuck to rock at my request. If I have to nitpick about mbl, it's that their rooms at audio shows often resemble raves in terms of volume levels. Once I sat in the driver's seat, however, I changed my mind. mbl's sound is characterized by almost unlimited size, dynamics and effortlessness. In other words, if you want to ROCK, there may be no better avenue to travel than mbl. 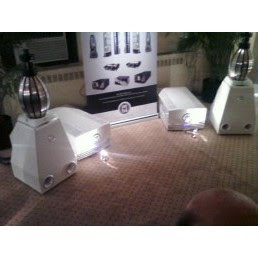 After a few songs I was impressed almost beyond words. Jeremy approached me and asked me if I wanted to hear Pink Floyd's "Money." I had to think about it for a second--I'm a big Floyd fan but at first it seemed like too obvious of a choice. But I shrugged my shoulders and said sure. All I can say is at the moment David Gilmour switched guitars in the solo, I literally got goosebumps. Tons of 'em. I can't remember the last time I felt goosebumps--maybe it was those Infinity IRS Betas I heard back in 1986--but there you go. Chills down the spines, the whole nine yards. I walked out of the room, my last of the show, with a big smile on my face. Thanks, Jeremy!
Posted by . at 10:00 PM