The Giro has landed. 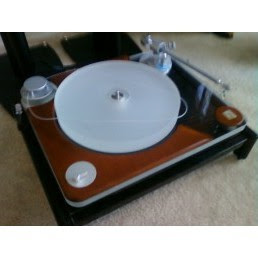 I know, I know...I said I wasn't going to mention Unison Research or Opera Loudspeakers in this blog since Colleen Cardas and I are the US distributors. But it's news when the Vinyl Anachronist gets a new turntable, isn't it? I'm a company man through and through, and I wanted to get familiar with it before we start selling it in the US.

This is the Unison Research Giro turntable that I just bought. It's mine. I just unboxed it and got it partially set up, but I'm still waiting on the matching UN1 cartridge to show up. [Note: It was hiding in the box the whole time.] Both the Giro and the UN1 are made for Unison by Clearaudio, so you'll notice a distinct resemblance. But these products aren't badge-engineered a la General Motors but made to Unison's specifications. Plus there's all that gorgeous wood on top of the typical Clearaudio acrylic, a Unison trademark.

It's also not plug and play...you have to put it together piece by piece. I've been so spoiled by Rega over the last few years that I'll have to drag out my TT tools and brush up on Turntable Set-Up and Cartridge Alignment 101. It's not anywhere as difficult as the Michell Orbe SE I owned from 2003 to 2009, which came apart in about 100 pieces. But it takes a little time to get everything set up right. But at least Unison supplies a pair of white gloves so you can keep the beautiful, glossy surfaces clean while you're assembling the Giro.