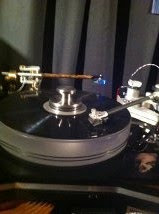 The buzz at RMAF this year seemed focused on a rather novel--some might say crazy--new innovation from Peter Ledermann from Soundsmith. Over the last couple of years, Soundsmith has exploded on the high end audio scene with a huge line of cartridges and other products. Just a few years ago Peter Ledermann had a small business that focused on re-tipping premium cartridges, and soon he started marketing his line of pickups that started with his famous strain gauge cartridge (which included a dedicated preamplfier...all for a dear $14,000 when first introduced). Now Peter has evolved into a serious mover and shaker in the industry, and his designs have really garnered a significant following.

This year, however, he made a bold move by introducing a new cartridge, the Hyperion, that uses a cactus needle for a cantilever. "Cactus needle?" everyone seemed to cry in disbelief, but once you listen to Peter explaining the reasons for such a design, his ideas make perfect sense. Cactus needles, as most of you know, were once used by old phonographs back in the days of 78s. But needles were extremely simple back then, and they are the sole reason why a majority of 78s suffer from an unbelievable amount of surface noise. Or, as my friend Terry Combs says, "these records were played with a nail for over 50 years," which is why most of them are in bad shape. 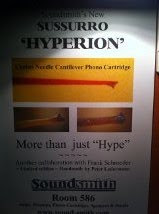 But Peter is not using cactus needles as the stylus, but as the cantilever. It turns out that it's an almost ideal solution since strong fibers run through the length of needle, adding to its rigidity. These fibers are also create spaces within the needle that are filled, over time, with a unique natural resin that excels at damping and controlling energy and resonances. Finally, these needles are naturally tapered, the ideal shape for a cantilever, something that is costly to do when it comes to traditional cantilever materials such as aluminum, ruby, boron and whatever else you have. As Peter told me, "We've been making phonograph needles for 80 years, but God has been making them for millions of years!"

Peter was inspired by Frank Schroder, maker of the superb Schroder tonarms, who first suggested that cactus needles would be an ideal material for a cantilever. Frank has been using the strongest and most rigid woods for his tonearms for the last few years, woods such as black palm and horizontal (which comes from a New Zealand tree noted for having branches that stick out at perfect right angles from the trunk, which is unique in nature and demonstrated the sheer strength of the structure). Peter told us to thank Mr. Schroder for the inspiration, saying "Tell him I said thanks for 'needling' me!"

I was able to listen to the Hyperion cartridge in Peter's room at RMAF, where it was used with a VPI TNT turntable that was equipped with both a VPI and a Schroder arm. The sound was simply superb, with a smooth, full and warm lower range augmented with highs that were almost limitless. There wasn't a trace of hardness or brightness anywhere, but I could hear every little detail in the recording. This cartridge sounded unlike any other I've heard. Peter extrapolates on this by saying, "All other cantilevers are synthesized--we GROW these!" 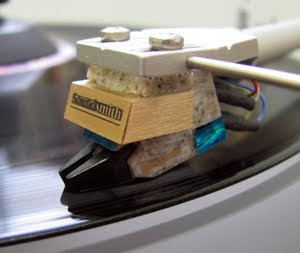 The Hyperion is not cheap at $7000. But before you start complaining that cactus needles are cheap because they're simply collected in the desert, you should know that it takes an inordinate amount of time, effort and skill to attach a stylus tip to the end. Peter uses a thorough and painstaking procedure to determine if each needle is the perfect shape and structure for these cantilevers, and then precision forms them using a patent pending method. At any rate, the Hyperion is an extraordinary product, and I congratulate Peter on such a remarkable innovation.
Posted by . at 2:49 PM