Bradley Wik and the Charlatans' Burn What You Can, Bury the Rest...on CD 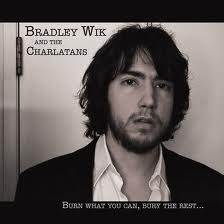 Do you remember rock and roll?

No, I'm not paraphrasing "American Pie." I'm asking fellow boomers if the music they used to call "rock and roll" is still alive and burrowing between all the fragmented genres that exist in the music scene today. The overexposed musical quagmire that's flippantly referred to as Americana certainly brushes against rock and roll's shirttails every so often, but the straightforward stuff is gone. Do we miss it? Did we need something more? Or do we still secretly listen to our rock and roll albums when no one else is around?

Bradley Wik and the Charlatans' debut album, Burn What You Can, Bury the Rest gives me the same feeling of comfort as when I see a teenager, in 2011, wearing an old Zep or DSOTM t-shirt. It's no secret that the latest generation of musicians is finding solace in Springsteen and Petty and Mellencamp--Ryan Adams certainly backed up his asphalt mixer to that particular stretch of the road a decade ago--and Wik and his band have been staying up late at night, studying these songs, digging around, and finding the emotional core. They're intent on bringing rock back...not the wild, raucous and jubilant type but the introspective, weary and gently redeeming rock that we'd listen to back in the '70s just before it was time to stop partying and go home.

As someone who is bringing up the rear of the Boomer generation, I'm certainly responding to this music differently than someone more typical of Wik's audience: it's not nostalgia I'm feeling as much as comfort, familiarity and a long-neglected urge to light one up. There's an old-fashioned feeling to these songs that permeates every guitar riff, every drum fill, every bit of over-saturated reverb coming from the amps. This filters down to the lyrics, where that always tumultuous marriage of old-time religion and rock makes an appearance or two--when Wik announces on the album's opener, "The Dark Lovely," that the "heavenly choir is singing dirges," you might think of an album such as Slow Train Coming. It certainly takes you back to a place that was, in retrospect, pretty nice.

Wik's songs, propelled by the rough melancholia in his voice, all express a certain level of tired relief. It's not a feeling of giving up or giving in, but rather the break someone takes before they pack up and move on to the next adventure. Bradley Wik and the Charlatans may continue to mine this pure rock and roll for a few more albums, attracting his generation as well as their parents. Then again he could step outside of his very comfortable comfort zone and fall in with his brethren and do something else, something weird or different. But he'd be leaving a very empty room behind, the room where we used to slap on our headphones, light up a joint, sit in our denim beanbag chairs and think about the life ahead.
Posted by . at 4:56 PM

Email ThisBlogThis!Share to TwitterShare to FacebookShare to Pinterest
Labels: bradley wik and the charlatans, bradley wik burn what you can bury the rest, the vinyl anachronist