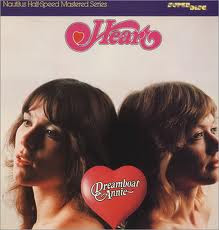 Earlier today I had a fascinating phone conversation with Bill Roberts, the well-known mastering engineer and loudspeaker designer, and we started talking about great rock recordings in the '70s. Our jumping-off point was obvious--Dark Side of the Moon--and Bill's point was that is today's rock and pop was recorded with the same care, we'd be able to to foster in a whole new generation of audiophiles...or at least people who genuinely cared about sound quality.

I agreed with him wholeheatedly, of course. But Bill mentioned two other classic rock albums that he felt offered incredible sound quality: the first album by Boston, and Heart's Dreamboat Annie. The Boston album is a no-brainer; thanks to Tom Scholz's perfectionist tendencies in the studio this is truly a monster of a recording. I still remember the day my older brother came home on leave from the Air Force in his bitchin' new black Camaro and played that album full blast as we went for a ride around Garden Grove. But Dreamboat Annie? Sure, "Magic Man" always sounded big and awesome when it popped up on the radio, but I'd forgotten about this one. Besides, Little Queen was always my go-to album when it came to Heart.

After our phone call ended, my curiosity got the better of me and I went into the listening room and pulled out my Dreamboat Annie LP. It wasn't just any LP, mind you, but a Nautilus half-speed pressing that I'd probably only played once or twice over the last decade. Once I sat down and started listening, I knew what Bill was talking about. This is a warm, well-recorded LP that sounded much better than I remembered. When that thundering synthesizer comes in during the bridge, I heard deep bass harmonics that I'd never noticed before. The kick drum from "Soul of the Sea" was so deep, smooth and fleshed out that it practically reached out and hugged me. 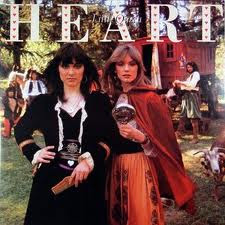 For comparison, I brought out my copy of Little Queen, which I have played a bit more often over the years. Again, it was no slouch when it came to pressings; it was the CBS Mastersounds half-speed version. And while it certainly sounded punchy and fun, it was no match for Annie. Ann Wilson is definitely a vocalist who can peg the meters when she belts out notes, and when she really lets loose on songs such as "Dream of the Archer," her voice was edgy and peaky and way too aggressive. When she hit the same notes on Dreamboat Annie, the recording engineers were wise to move her powerful voice back into the mix so that it never became overwhelming.

So what's the point? Well, Bill said the reason why these particular albums were so well-recording was because the engineers didn't do what everyone else did at the time. (Remember those disclaimers that said "this album was meant to be played LOUD"?) They knew the equipment, they knew acoustics and they knew they were serving the music first and foremost. Or, as Bill paraphrased from someone else, "Airplanes didn't reach supersonic speeds with propellors." True innovation always comes from radical new thinking in spite of what others claim is "possible" at the time. I know, that's called "thinking outside the box" and it's an overused term to say the least. But I know that it applies to high-end audio as well as music in general, and the most interesting products in audio tend to forge new pathways instead of paving over old ones.

Or, as one engineer once told me after I railed against audio people who claim measurements tell the whole story, "Good engineers never say 'that won't work" when they encounter a new idea. They say, 'Why does it work?'" Dreamboat Annie may not be the most salient cornerstone of this philosophy, but it was certainly nice to redicover it, hiding deep in my LP collection, waiting to be heard one more time.
Posted by . at 11:18 PM