The Battle of the Super DACs 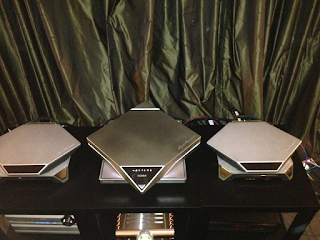 At this year's CES I was far too busy to get out and see other rooms, but I did make a special trip (with Bartolomeo Nasta of Unison/Opera) to hear two products, both DACs that retail for more than $30,000. The first, Light Harmonic's DaVinci, was the hit of the Rocky Mountain Audio Fest in October. I'm good friends with Gavin Fish of Light Harmonic, and I regretted missing his room at RMAF so I made sure I listened at CES. The second DAC, the CH Precision C1 Digital to Analog Controller (which also contains a preamp), was recommended to me by a group of well-heeled Austin audiophiles who claimed it was so good that they were trading in their $100K dcs digital stacks for a chance to own this Swiss beauty.

What was most surprising about these two very expensive systems was how different they sounded from each other. The Light Harmonic system, which included Wilson Sasha speakers and that gorgeous Momentum amplifier from Dan D'Agostino of Krell fame, offered a warm, rich and enveloping sound that completely immersed the listener in sound. The CH Precision system, which featured the new A1 monoblocks (which retail for about $75,000 per set) and Zellaton speakers from Germany, had a much more laid back and revealing presentation. While both systems were utterly captivating, I found myself leaning toward the CH Precision gear while Bartolomeo preferred the Light Harmonic system. 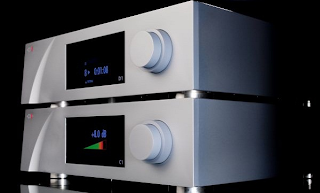 Unfortunately I was unable to get decent photos from the CH room because it was so dark (I've included one pic from the CH website), but Bart was able to capture several images of the DaVinci. What's most remarkable about the Light Harmonic is the sheer size of the DAC. Bart asked Gavin, "Why is it so big?" Gavin explained that the unit, which is extremely heavy as well, contains no less than five power supplies. As you can see from the pics, the DaVinci was flanked by two other similar units--one is a digital streamer and the other is a digital transport/server. A lot has been said about the polarizing style of the Light Harmonic gear (one scribe called it the Darth Vader of high-end audio), but in person this gear is impressive, substantial and very well-made. 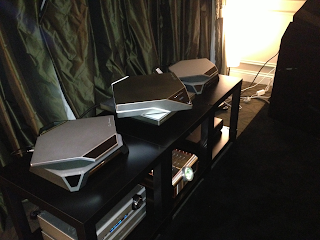 So why is the Vinyl Anachronist suddenly obsessed with $30,000 DACs? Well, I'm the first to admit that digital playback has gotten so good over the last few years that I'm no longer a staunch vinyl "bigot." I would be deliriously happy with either the CH Precision or Light Harmonic gear. Those knowledgeable about high-end audio are also keenly aware that this year's $30,000 DAC is next year's $10,000 DAC, and so on. I've gone on record (pun intended) that I will play LPs for the rest of my life, but it's nice to know that I can still be satisfied with digital technology in case all those LPs and turntables disappear in the coming years. I'm very thankful that companies such as Light Harmonic and CH Precision push the performance envelope in the manner that they do, and that the hi-fi future looks incredibly bright.
Posted by . at 1:43 PM