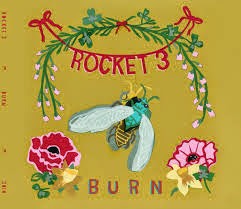 Back in 1993 an Australian band known as Clouds released an album, Thunderhead, and I honestly thought they would become huge in the US as a result. The band sounded so unique because it mated baby-doll vocal harmonies from a pair of frontwomen with a very hard, chunky and kick-ass early '90s grunge. While other groups of that time--Letters to Cleo, Elastica and Veruca Salt, for example--wiggled their way into the American rock scene twenty years ago, I still think Clouds had the best template for that sound, and I still bring out my old CD copy of Thunderhead out and play it every few years. Does anyone else do the same, or even have the slightest idea of what I'm talking about? Clouds were super cool, dammit.

I bring them up because it's rare when a new band reminds me of their almost paradoxical sound. Rocket 3, a winning trio from Portland, does. They may not rock quite as consistently hard as Clouds--their debut album Burn does contain some softer, slower songs that make the overall comparison sort of moot--but when they get rolling on songs such as "Good Enough" and "Jealous Girl," that chasm between a straightforward rock band and lovely, sexy vocals (courtesy of guitarist Ramune) is extremely evocative of the rock scene twenty-plus years ago. Backed up by drummer Drew and bassist Tony, Ramune was reportedly late to the music game and only recently learned how to play. That's not a problem--she knows the basics and her uncluttered rhythm lines are reminiscent of early Talking Heads where each member used to treat their instruments like alien and suspicious devices. With this type of band, the whole is always greater than the sum of its parts. 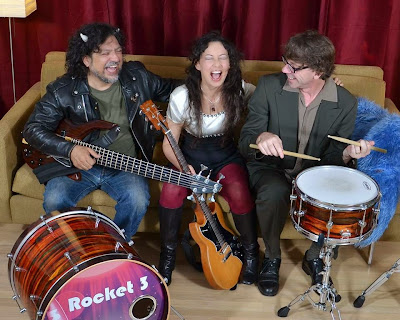 On their Facebook page the band lists their interests as "playing music, being goofy and laughing so hard it hurts," but that doesn't mean that Rocket 3 is your normal party band from the City of Roses. Upon first listen, I thought the trio's sound was imbued with a bit of the shoegazer spirit, especially considering that Burn ends with a version of My Bloody Valentine's "Only Shallow" that's so reverent that it could only come from true fans, so good that even the most hardcore MBV fans will say, "Oh that's okay, we're not offended by this." This album is lots of fun, but not necessarily in a lighthearted way--it has an almost drone-like momentum hiding within its deepest recesses, and that darkness is worth searching out. 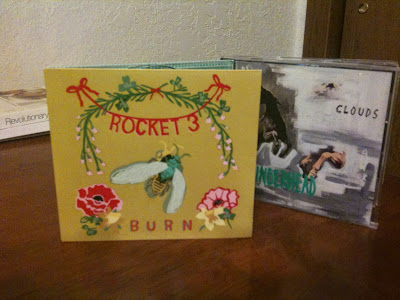 The sound quality of Burn is a little soft and blurry around the edges--it doesn't sound nearly as crispy and tight as Thunderhead--so it probably won't appeal to too many other grumpy middle-aged audiophiles such as me. But I think Rocket 3 is the perfect answer to the question "What kind of music were you listening to twenty years ago?" I, for example, was listening to music like this instead of getting all misty-eyed with my friends watching Clapton play "Tears in Heaven." What's irony for one generation is nostalgia for another. Highly recommended, especially if you listen to it right before you drag out your old Clouds CDs.
Posted by . at 1:13 PM