More on the Trenner & Friedl Suns 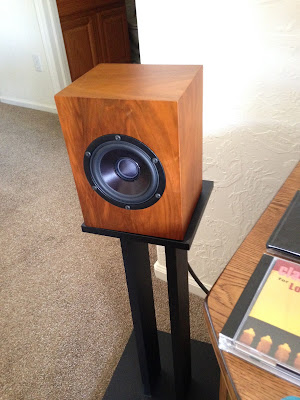 Remember those tiny Trenner & Friedl Sun speakers that I loved at the Newport Show? They're at my house right now. On the last day of the show I walked up to Bob Clarke of Profundo, the US distributor for Trenner & Friedl, and said, "So, Bob...what you gonna do with them li'l speakers?"

"Well then send 'em home with me! I want to see just how good they are."

I didn't expect Bob to give in so easily, but later in the day I checked back into the Profundo/Blackbird Audio room and Bob pointed to a small cardboard box and said, basically, there you go. Take 'em. When I returned home from Southern California last week, however, I realized there was a glitch in my evil plan to bogart these amazing little speakers. I didn't have a single amp in the house to use in our reference system. I sold my last one while I was at the show, my personal reference since at least October, and I had to ship it out to the dealer ASAP.

I really wanted to put some incredible amplification on the Suns. At the show, Bob and Dan Muzquiz of Blackbird paired the Suns with the new Elixir integrated amplifier from Heed Audio, which will cost probably about $1200 once it starts shipping from Hungary. Along with a Heed CD player, this system let everyone at the show utterly gobsmacked. At home I thought about pairing the Suns with a nice tube amplifier with some power--while Bob doesn't have the final specs from Trenner & Friedl yet, he suspects that they have a less than average sensitivity--just like my personal Trenner & Friedl ART monitors. I also thought about pairing them with the PureAudio gear, a full $20,000 worth of amplification. After all, the ARTs paired really well with the PureAudio gear over the last couple of years--one of the best speaker/amplifier matches I've performed among our brands. 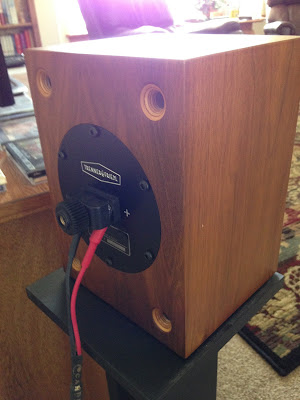 But I have nothing, nada. No music for at least a couple of weeks, until my next shipment comes from Europe. So I started thinking about the system my parents have. If you've read any of my old Vinyl Anachronist columns for Perfect Sound Forever, you'll know that I've always maintained a modest but well-chosen system for my parents over the years. I started back in the mid-90s with a Rotel integrated, a Music Hall CD player and a pair of those incredible little $200/pair Optimus Pro-4 speakers from Radio Shack, the ones with the Linaeum tweeters, the ones I actually got for 50% off.

Over the years, the ephemeral Music Hall was replaced with a succession of cheap Sony DVD players, the Optimus Pros were switched out for a pair of Epos ELS-3s when the vinyl veneers started peeling off in big sheets. Finally, just a few months ago, the Rotel started acting up in one channel so I helped them choose one of those inexpensive yet fairly competent little T-class integrated amps from Dayton Audio--another fabulous $100 bargain in the world of hi-fi. For the last couple of years Colleen and I have wired this system with some of the more affordable cables from Cardas Audio. 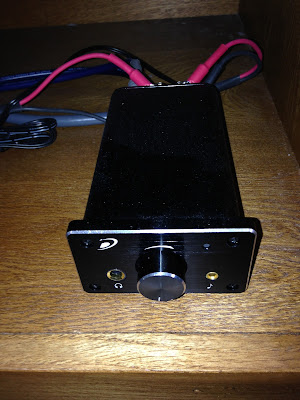 This system has always sounded relatively great, considering the cost of the components, but I've never been able to get what I would call truly satisfying sound in their house. First of all, they don't really have a good room for it--first they placed this system on an old yet beautiful walnut bookcase, the very same one I now use as a two-way mini-monitor display in my living room, in their bedroom. Over the last year they've redecorated their home, and the bookcase went to me and the stereo migrated to their living room and now resides in a new entertainment hutch/rack/TV stand/thingie. Still, the sound is somewhat small and closed in because my parents like to shove the little Epos as close to the rear wall as possible. Whenever I visit, I pull them out a little. Whenever I return, they've been pushed back.

Yesterday, on my father's 84th birthday, I came over and swapped out the Epos for the Suns. Again, the Suns have an internal enclosure about one-third the size of the Epos. Even my Mom had to chuckle at the diminutive little Suns. Once I hooked them up, however, the sound was transformed. This was anything but subtle. For the first time in my life, I have heard genuine high-end sound at my folks' house. 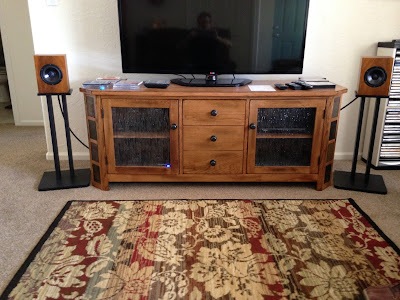 My father, who probably is an audiophile in some alternative universe--he possesses excellent hearing and often makes the same exact comments about specific pieces of audio gear as I do--instantly heard a profound increase in soundstage depth. For the first time, the wall behind the system dissolved and I heard the original recording venue recreated spatially. I also heard something else equally impressive--solid, tight and well-controlled bass. Both my father and I are sharing a love for Harry Belafonte's music these days, and he played a rather typical '80s live recording, all bright and twinkly and ultra-etched, and yet there was a solid, accurate reproduction of the electric bass on every track. My mom felt compelled to go outside and monitor the volume levels from the front curb--she was worried the neighbors were going to complain.

In nearly every respect, I felt like I was listening to a genuine high-end system comprised of a $100 T-class integrated, a Sony DVD player that probably cost $29 new, and one of the most surprising tiny speakers I've ever heard. Of course the Suns were revealing the weaknesses in the amp and source--there was a dryness throughout the upper midrange during louder passages that's fairly typical of cheap digital and cheap D-class amplification. At the same time, the Sun really took advantage of the Dayton's 100wpc to deliver deep, convincing bass and an unbelievably airy and delicate treble. The imaging and the soundstaging was some of the best I've heard from any speaker of any size.

So I want to keep using these Suns in different applications. We've shown that they can transform a mediocre system into something that approximates totally decent sound. Next, Colleen has a relative who just purchased a super-cute but super-small house in an older neighborhood. The only problem is her living room is about half the size it should be, and my first thought after I crossed her threshold for the first time was "Where would the stereo go?" So I'd like to see if the Suns work in another modest system set in a really small room. (The ARTs are, in my opinion, the best speakers I've used in a small room.)

That would be another good reason to buy these. Finally, let's hook the Suns up to something amazing just to see what they can do. Tiny speakers that sound great have always had a fairly difficult time in the marketplace--think about all the negative comments you heard when the Acoustic Energy AE-1s first appeared, or the Celestion SL-700 SE. The Suns are even smaller, yet they're offering a level of sound quality that I've never experienced with an enclosure this small.

The perfect speakers for tiny apartments? Ivy League dorm rooms? A desktop computer system? Or just something that's small and unobtrusive and still offers high-end sound? I hope I get to find out the answers before I have to send them back.
Posted by . at 4:44 PM